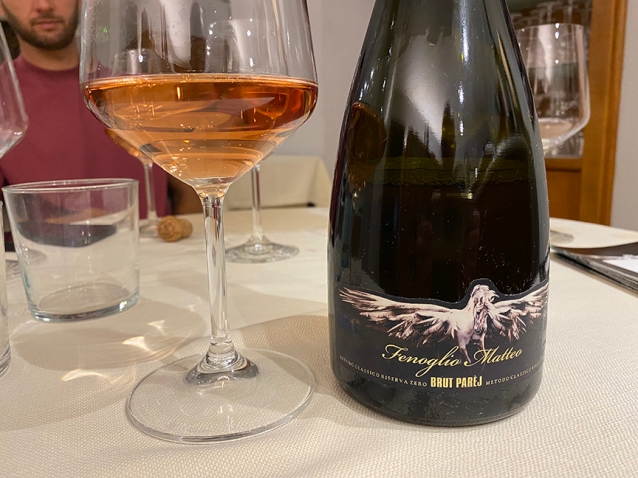 It’s not every day that you get an Instagram message from someone named Fenoglio.

But that’s what happened a few months ago when a note showed up in my inbox from Matteo Fenoglio, a young and superbly talented grower and winemaker from Alta Langa and a distant relative of the celebrated Langa writer Beppe Fenoglio, a partisan and 20th-century Italian hero.

With his missive, he invited me to visit his small winery in Serravalle Langhe where his family has farmed for generations. It would be difficult for me to make the trek given my work and family responsibilities, I responded. But if he wanted to come see me in nearby Bra where I teach a few weeks each year, I would love to taste the wine.

Yesterday, he drove over to Bra from the family farm in Serravalle Langhe, where he grows Pinot Noir, and we sat down to taste at the Hotel Badellino where I stay each time I’m in town (thanks again, Mr. Giacomo for setting us up with a spot to taste!).

He farms organically, he told me. He doesn’t inoculate his wine; does the riddling by hand; uses organic sugar for the tirage; ages the wine on its lees in his family’s infernot without the use of temperature control; and he never adds a liqueur d’expedition. His total production is around 10,000 bottles. (His other gig is hazelnut farming btw.)

This compelling wine really impressed me with its gorgeous, delicate aromas of berry and bright red fruit. On the palate, the wine was fresh with the red fruits getting slightly darker. The clean finish lingered with hints of the flavors in the palate. It was delicious. I loved the nuance and clarity of the fruit as it played against the wine’s gently salty backdrop.

But despite being a legacy grower in Serravalle Langhe, a commune where Alta Langa can be produced, the growers association has refused to let him join their consortium. Admissions are currently closed, they told him. He can only watch with bewilderment as some of the big wine groups have planted vineyards and built wineries there while he is sidelined by bureaucracy.

Alta Langa, the Langa Highlands, as it were, is a name created especially for this relatively new appellation. It refers to the minimum altitude for the vineyards, 250 m.s.l.

Over about an hour we spent together, we talked about how the toponym Alta Langa really isn’t a place name at all. It was coined especially for the appellation as it was birthed. While all the new wineries being raised and vineyards being planting around him, he seems to feel like he hasn’t been invited to the party (let’s just leave it at that).

Evoking the novels of Fenoglio and his contemporary Cesare Pavese, he told the story of how his family were farmers who fled the post-war depression of their hills to work in the Ferrero factory in Alba where he was born. But they never abandoned their parents’ land. And when he came of age, he began to farm there again, including some old vines still growing there.

I found him to be as compelling as his wine. And I highly recommend both. Search them out.