Above: an agricultural calendar from a “painted book” (circa 1309) of Pietro de Crescenzi’s treatise on farming, possibly executed in his lifetime. There numerous extant 13th and 14th century manuscripts of his book Ruralia Commoda and translations of his work became instant best sellers in the 15th and 16th centuries in Europe. Note the October panel where the figure is crushing grapes. Image via Wikipedia.

As Nietzsche famously wrote in the Twilight of the Idols (1889), the philologist must look beyond the “sacred texts.”

In today’s world of wine, the spiritually focused writings of early-20th century critical theorist Rudolf Steiner have become one of those pillars — a sacred text — of our shared “constitution of knowledge.”

But if we look beyond his writings on agriculture (which represent a small part of his critical output; just think of his many titles devoted to Christ), it doesn’t take long to realize that he was merely repackaging knowledge and know-how that had been around for a long, long time.

In my recent close reading of the 13th century Bolognese jurist and agronomist Pietro de Crescenzi, whose Ruralia Commoda was an ante litteram best seller from the time of its first circulation in the late 1200s to the height of the Italian Renaissance and beyond, I’ve discovered some important antecedents for our current understanding of biodynamics.

The most striking of these is Crescenzi’s detailed instructions on how to follow the lunar calendar for planting, sowing, and winemaking. 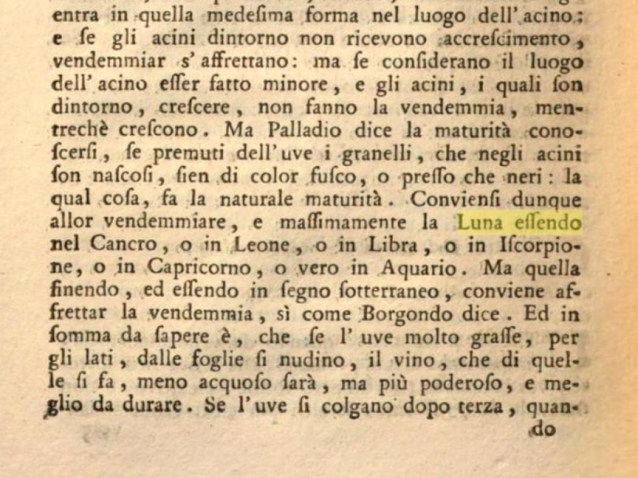 Above: a folio from a 1784 Italian translation of the Ruralia. The work’s popularity only began to wane in the modern era.

Among the descriptions of lunar cycles and the best moments to carry out work in the fields, some of the most compelling recommendations are in reference to winemaking and more specifically in reference to obtaining the highest quality in wine.

In the passage highlighted in the image immediately above, he explains the exact, ideal moment in the lunar cycle to pick. Wines made from grapes picked at the right time will be less “watery,” more “powerful” (alcoholic), and better for aging.

Wow, sound vaguely familiar? The language is different. But the concept, based on observations made during Crescenzi’s constant and extensive travels throughout Italy, is the same.

But isn’t it incredible to think that today thoughtful and highly informed people are growing grapes and making wine according to the same practices that Crescenzi prescribed in the 13th century?

Forget Steiner, let’s read Crescenzi! And when we’re done reading the Bolognese jurist, let’s reach back even further and browse the Γεωπονικά.

Week after next, I’ll be pitching a translation and critical apparatus of Crescenzi’s book on viticulture to an academic publisher. So whatever you do — poo, poo, poo! — don’t wish me luck! Seriously, thanks for being here and thanks for reading. See the Unicef link at the beginning of this post.