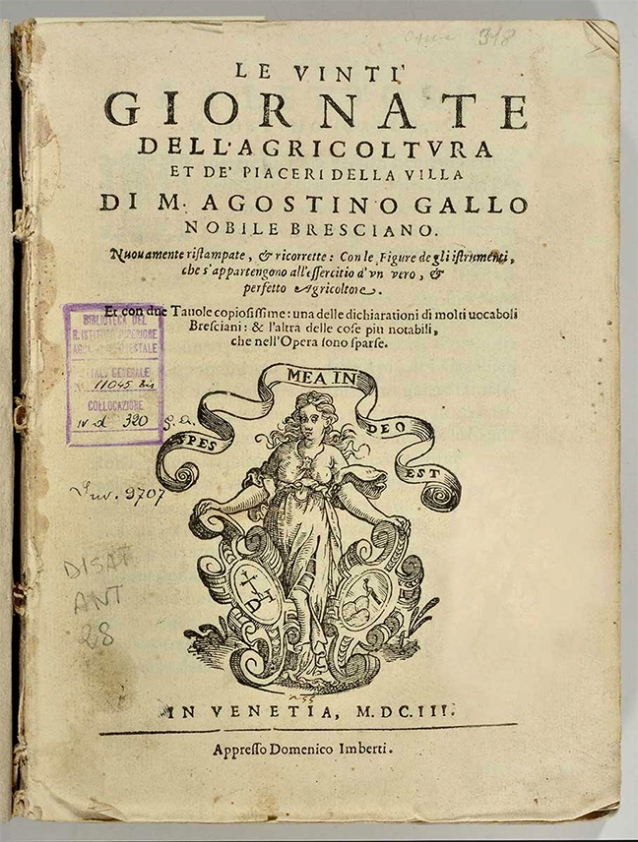 Above: frontispiece from a reprint of Agostino Gallo’s treatise on agriculture. See this wonderful post on the University of Florence Libraries website about Gallo and his work (in English).

Throughout the course of western history, periods of greater polity and prosperity have led to “golden ages” where artists and artisans have thrived and flourished.

The leading figures of Greek and Roman culture and their achievements would become the guiding lights of their counterparts during the Renewal of Learning in Europe in the 14th, 15th, and 16th centuries in Europe.

Proto-humanists like Dante, Petrarch, and Boccaccio — the “three crowns” of Italy’s Trecento (1300s) — would be the harbingers of Italy’s Renaissance with a capital R. The painters, sculptors, architects, craftspeople, writers, and thinkers who would follow continue to inform our aesthetic and critical sensibilities today. Even pop culture in the “age of mechanical reproduction” (see Walter Benjamin), with its petty references to Leonardo’s “Gioconda” or Michelangelo’s “David,” feels the influence of Renaissance Italy’s epistemological might.

In a parallel with our own age, it was only natural that the interest in wine — arguably the most intellectual of the agricultural arts — would rise in tandem with the fermentation of human thought.

The works of Renaissance-era ampelographers and viticulturalists like Andrea Bacci and Giovan Vettorio Soderini are evidence of this. As other Italian writers, aided by Renaissance Italy’s pioneering typographers (think Aldus Manutius), would publish books on manners and style (Della Casa) and politics and governance (Machiavelli and Castiglione), so too did Italy’s great manualists compose tomes on agriculture and viticulture. Think of the now neglected writings of Brescian agronomist Agostino Gallo whose Giornate dell’agricoltura et de piaceri della villa ([On the] Daily Management of the Farm and the Pleasures of Country Life) was a best-seller of its time and widely popular even beyond Italy’s borders.

Egged on by my dissertation advisor and friend Luigi Ballerini, whose been nudging me for some time to publish my research on wine writing during the Italian Renaissance, I’ve been diving into some of those delicious manuals in recent weeks. And by diving in, I mean reading the entire works and not just the often quoted, underlined passages that reappear in wine writers today.

I’m super geeked about some of my findings and I’m looking forward to publishing them later this year.

But I just had to share this nugella (nugget) from Soderini. In his Treatise on the Cultivation of Vines, composed at the end of the 1500s, he observes: “Just as art is destined to correct and modify many things in nature using human thought and diligence, similarly, in crafting wine, it is worthwhile to revisit and study the undeniable value of experience which forms the basis of the entire science of agriculture.”

Man, if that’s not Renaissance thought in a nutshell, I don’t know what is! The Renewal of Learning, after all, was a rediscovery of ancient thought repurposed and reimagined for the new age.

There’s so much to say about Soderini and other writers that I’ve been studying and I’m looking forward to sharing my findings. Some, I think, are going to inspire and compel.

Thanks for being part of my journey…

2 thoughts on “Wine as art, art as wine in Renaissance Italy.”