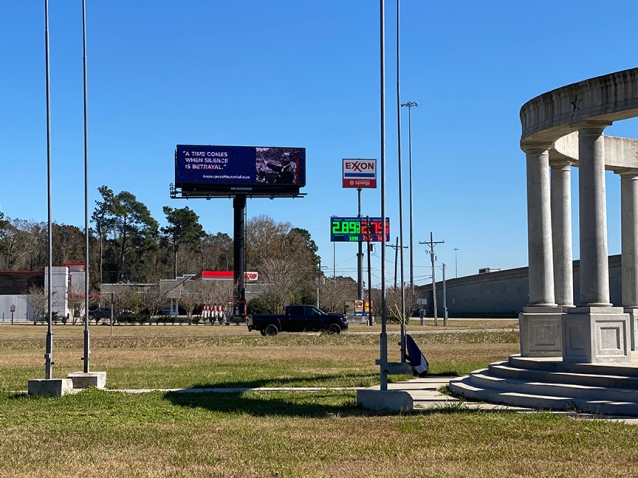 As a chilly dawn breaks over Southeast Texas, a billboard with an image of Dr. King and one of his most famous quotes can be seen rising over eastbound Interstate 10, just a few miles west of the Louisiana border.

The image stands on MLK Dr., one of the main arteries of Orange, Texas where Tracie grew up and where we often visit our family with our children, ages 8 and 10.

Our girls, Georgia and Lila Jane, know a lot about Dr. King, his life and legacy. They know that only a generation ago he fought for all Americans to enjoy the freedoms of living in a democracy. They know that he ultimately gave his life in his ceaseless efforts to make our country a true democracy, one where all people, regardless of their color, could live without fear of authoritarian violence and suppression.

They know little of the insidious efforts of neo-Confederates like the Sons of Confederates Veterans who unveiled a newly built monument along MLK Dr. in Orange in the shadow of I-10 in 2017.

They know little of the Sons’ main propagandists, the Kennedy brothers, who sell their books on the Sons’ website — books like Was Jefferson Davis Right?, Rekilling Lincoln, and The South Was Right (also available on Amazon).

They know little of how their neo-Confederate foot soldiers, like the ones who raised the monument in Orange, claim to be merely celebrating their “heritage” and “history,” as they like to put it.

They know little of the historic, collective suffering the Black community in Orange has endured for generations since slavery, Reconstruction, and Jim Crow.

Georgia and Lila Jane drove by those flags just a few months ago when they attended their great-grandmother’s funeral. She worshipped at a church just a few miles up the road from the monument. Between the church and graveside services and then the reception that followed, they passed by the site four times. But they hardly know what those flags mean and what they represent to the people who live here.

They do know that their parents, with the help of generous donors, have raised the billboard that today appears across the road. They know that each year their family visits Orange on MLK Day to march in the city’s historic MLK Day parade (now on hold because of health concerns). They remember that they themselves have marched in that parade in years past.

Tracie and I share our heartfelt thanks with everyone who contributed to our Go Fund Me campaign to raise the billboard this year. It was first posted on Friday and will remain in place throughout Black History Month (February).

Read more about our ongoing efforts to repurpose the site on RepurposeMemorial.com.