Above: the deceptive facade of Corti Bros. offers little clue as to what treasure lies inside this storied structure.

Those who have never visited Darrell Corti’s legendary Corti Bros. “specialty grocers” in Sacramento, California will be surprised to discover that the store is much, much more than a mere retailer of great food and wine. The shop, they will find, occupies a space that also serves as museum, library, and bookshop.

In many ways, the food and wine at Corti Bros. is actually a “front.” Not in the sense of a criminal operation. But rather by virtue of the fact that the food and wine are a pretext for what 16th-century European humanists would have called a “gallery of memory.”

Above: a display of ravioli cutters dating back to the 16th century. Click the image for the “label” as we call it in museumspeak.

In Renaissance (with a capital R) Italy, knowledge was considered a means to power, like weapons or gold. And the key to knowledge, it was believed then, was memory. To bolster memory, humanists would create what Italian scholar Lina Bolzoni has called galleries of memory — physical spaces that helped them to organize and retain knowledge in their memory. They were actual rooms where the walls were covered with paintings, drawings, and writings.

Strolling around Darrell’s shop earlier this year, I couldn’t help but feel like I was traveling through Darrell’s mind, revisiting all the nuggets of knowledge — aesthetic and otherwise — that he has gathered over a lifetime of curiosity and unbridled gastronomic adventure. That space, I concluded, is his gallery of memory.

Above: breadcrumbs and books. How many food shops have you visited that double as a library? Darrell’s food and wine-focused collection rivals those found in some of the best libraries in the U.S. No joke. I’ve visited those libraries, too!

The story of how Darrell and I met is as funny as it is indicative of what a mensch – a wonderful human — that he is.

Not long before I visited Sacramento in the mid-aughts to make a record with my band Nous Non Plus there (at the famous Hangar, another great story for another time), I had traveled to Tuscany to meet with Baron Bettino Ricasoli, Francesco Riscasoli’s father. I was searching for a copy of his ancestor’s famous letter wherein he offers a “recipe” for the production of Chianti. It was one of the most memorable visits of my career and Bettino and Francesco were lovely. They pointed me to where I would find the letter and I later translated it for the blog.

During a luncheon of classic Tuscan-style tripe (Bettino’s favorite), the Baron asked me if I had ever met Darrell Corti. No, I told him. He said that if I ever were to visit Sacramento, I must absolutely seek out Darrell. My interest in food and wine history, he told me, reminded him of Darrell’s.

“If you ever do visit him,” he insisted, “please tell me that I sent you.”

Above: the dried pasta selection at Corti Bros. takes up an entire aisle — a “gallery of [culinary] memory.”

Not long after the band arrived in Sacramento, the keyboard player and I headed to Darrell’s place for supplies (I always cooked and served wine at our recording sessions).

When we arrived at the store, I asked one of the cashiers if Darrell was there. She said she didn’t know but would call the back office to find out.

“Please tell him that Baron Ricasoli sent me,” I told her. She said she would.

But here’s the thing: we were rockers. I had shoulder-length (if already thinning) dyed-sandy-blond hair, mustache and goatee. Ryan, the keys player, also had a mustache and goatee and dreadlocks that literally stretched below his waist.

When Darrell appeared, he was livid!

“Who are you?” he demanded with a tone that barely concealed his understandable annoyance.

“My name is Jeremy Parzen,” I answered, “and Baron Ricasoli has sent me with his regards.”

Darrell suddenly pivoted and began to walk away.

“Stay right there,” he said.

Nonplussed, Ryan and I were convinced that we were about to be expelled from his shop.

But when he reappeared, he had a book in his hands. It was my translation of Maestro Martino’s 15th-century recipe collection, published by UC Press a year or so earlier.

“Would you please sign this?” he asked me. And thus a friendship was born, one that has profoundly shaped my intellectual and professional life over countless conversations, emails, and the occasional meal.

When I saw Darrell earlier this year, he reveled in retelling the story.

“They looked like the kind you have to follow around the shop,” he told one of his employees. 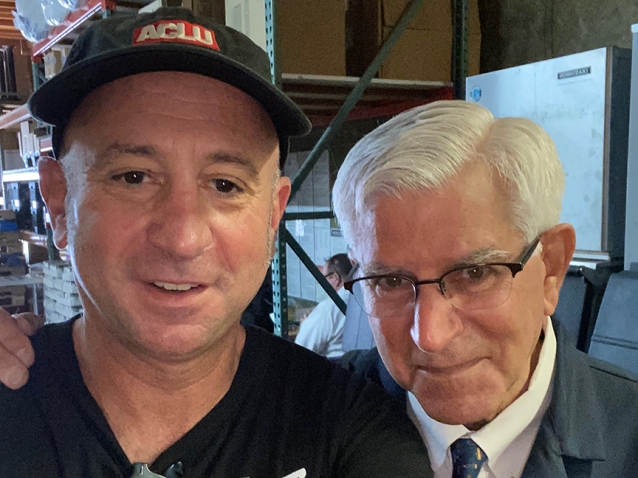 Above: Darrell graciously let me snap this photo of us together, an image that I cherish greatly.

Once when I visited Darrell during the annual California grape growers conference (he was the keynote speaker), one of the attendees pulled me aside and asked me if I knew who he was.

“He’s a national treasure,” she whispered, the hushed timbre of her voice a reflection of her reverence.

I don’t know that my career as a food and wine historian would have been as rich had it not been for the role model that Darrell represented for me. His friendship has been a blessing in more ways that I can count.

4 thoughts on “The incredible story of how I met the inimitable Darrell Corti, Italian wine pioneer and gastronomic “treasure.””