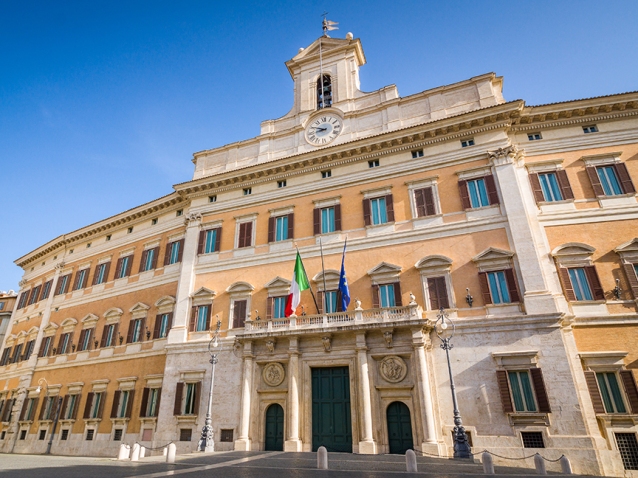 Above: Palazzo Montecitorio in Rome, seat of the Italian Chamber of Deputies (counterpart to the U.S. House of Representatives). Image via Adobe Stock.

Although it wasn’t entirely unexpected, Italian prime minister Giuseppe Conte’s announcement yesterday that he would resign set into motion what the Italian media have called a grave “crisis in the dark” (a reference to the political turmoil of the 1970s when the country faced a complete economic meltdown).

The collapse of the Italian government comes as the country faces cascading health and economic challenges.

(See the links above for the New York Times coverage.)

For Italian winemakers, many of whom are relying on domestic sales to keep their businesses afloat as exports have dropped precipitously, the political infighting couldn’t come at a worse moment. With nearly all of the country under lockdown, Italian restaurants and wine shops are required to shutter their doors at 6 p.m. every evening. As a result, major supermarket chains and other national retail outlets, which are allowed remain open in the evening, are seeing a boost in sales. But because the chain retailers source their wines primarily from larger wineries, this shift leaves smaller estates, who depend on boutique shops and independent restaurants, without a means to sell their products.

Earlier this month, Andrea Terraneo, president of the Italian association of wineshop owners (Vinarius), sent an open letter to prime minister Conte and his health and economic ministers asking him to amend the restrictions crippling the independent wine retailer industry. The “discriminatory” 6 p.m. cut-off, he wrote, has led to a 30 percent drop in sales in a sector already decimated by the pandemic fallout.

The restrictions add to the woes of a hospitality industry already besieged by the pandemic.

For small-scale growers, the government collapse only exacerbates the economic pain felt across the nation. Tasting room closures and restrictions had already shut off one of their main sales channels. And now, with the government on hold, there is little hope that the restrictions will be lifted in the near future.

If Conte or one of his rivals (namely, the self-described “Machiavellian” Matteo Renzi), are unable to form a new coalition, it’s possible a technical government will be installed to oversee the country’s current covid response and the management of forthcoming financial aid from the European Union — another crucial element in the wine industry’s recovery. Although unlikely, snap elections would take months to be implemented.