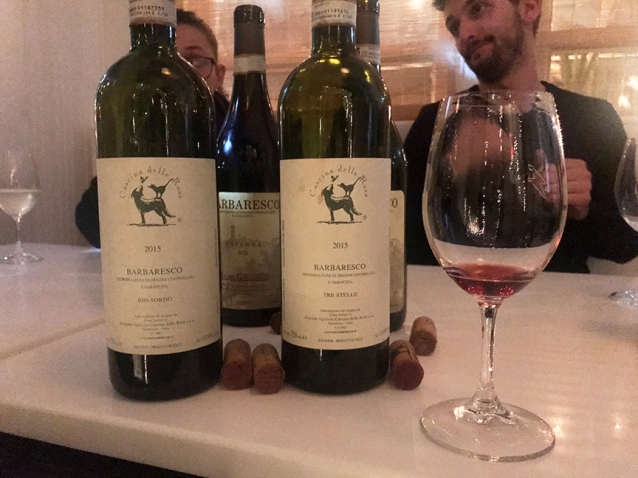 When we sat down to taste his family’s 2015 Barbaresco last night in Houston, Riccardo Sobrino of Cascina delle Rose reminded me that the first time we met — exactly 10 years ago, almost to the day — he was just a kid, the son of one of the appellation’s most beloved (however under the radar) producers.

Today, he and his brother Davide are running the family winery while parents Giovanna and Italo are enjoying retirement at their new “tiny but really nice” condo on the French riviera where Giovanna moors her sailboat.

“She’s always been a skipper,” he said in his slightly accented but masterful English.

The fact that he speaks my native language so well wasn’t lost on me: he’s part of the new Langa generation for whom English is a rite of passage, a skill set that not everyone possessed 20 years ago in the land of Barbaresco and Barolo.

We were joined by another new Langa generation winemaker, Matteo Rocca, the grandson of Luigi Giordano and another new face on America’s Nebbiolo circuit.

Matteo family’s wines are super old school, vinified with extended maceration time. They tend more toward earth and tar. We tasted his Cavanna, Montestefano, and Asili. And they all showed great, although the Montestefano and Asili are still very tight (to be expected). I thought the Asili was outstanding even though all the wines will be great in time.

Riccardo’s family’s Nebbiolo is always more expressive in its youth and the floral and fruit notes were already beginning to emerge on the Rio Sordo (their flagship cru) and Tre Stelle. The 2015 vegetative cycle in Langa was a warm, arguably more “modern” vintage as most winemakers agree (see this wonderful round-up of technical notes from Barolo producers here). Not an easy vintage, both Riccardo and Matteo conceded, but one that will deliver approachable wines earlier on.

Both Riccardo and Matteo (and Matteo’s SO, Gloria, who is visiting the U.S. for the first time!) are on their way to New York where they will be presenting their wines at the first-ever Barolo Barbaresco World Opening next Tuesday (click link for registration details; I’m not sure what “World Opening” means but it’s got to be good).

I haven’t seen the entire line-up of producers but there is no doubt in my mind: the new Langa generation has arrived!

Thanks Riccardo and Matteo for coming to Texas. I’ll look forward to see you guys this June when I’m back in Piedmont for UniSG.