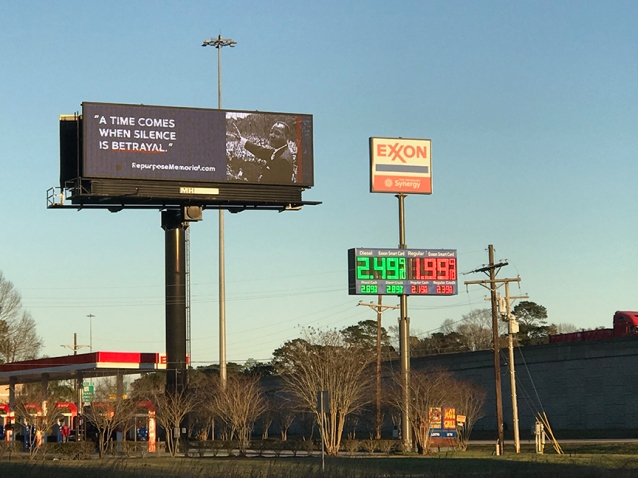 Today and for the next four weeks, our MLK billboard looks down on the newly erected Confederate memorial in Orange, Texas where Tracie grew up. It was designed by another Orange native, Ashley Evans. We were able to raise the billboard thanks to the support of concerned citizens who donated to our GoFundMe campaign. Thank you to everyone who helped make this possible. Happy Martin Luther King Day!

“The girls [our daughters, ages 6 and 8] and I had a long talk at dinner about what it meant when MLK Jr said that ‘silence is betrayal,'” wrote my wife Tracie on her Facebook last week.

“I hope they understand and I’ll do my best to show them how not to be silent. I know I will fail but they will see us trying. We can always do better, let’s do better. We HAVE to do better!”

And she shared the following the passages (below) from an op-ed published by The Root entitled “How to Be a Better White Person in 2020.”

Please join us today, MLK Day, for our protest of the newly erected Confederate memorial in Orange, Texas where Tracie grew up. Details follow.

Think about the men who owned no slaves but built slave ships to bring black people to America. Channel the ethics of the people who lived next door to people who enslaved human beings. Conjure up the thoughts of the people standing in the town square who silently watched lynchings. Pretend you were one of the people who stood quietly while segregationist mobs spit on little black children who were integrating schools. Imagine you were mute on that Montgomery bus when Rosa Parks refused to move.

For a brief second, assume you were one of the billions of idle, ambivalent or apathetic white people who objected to slavery, Jim Crow, inequality and injustice but didn’t do a goddamn thing. In your moment of deliberation, think long and hard about what those white people would do.

Then, just do the opposite.

Click here to read the piece in its entirety. And please join us today. We have plenty of signs for everyone.