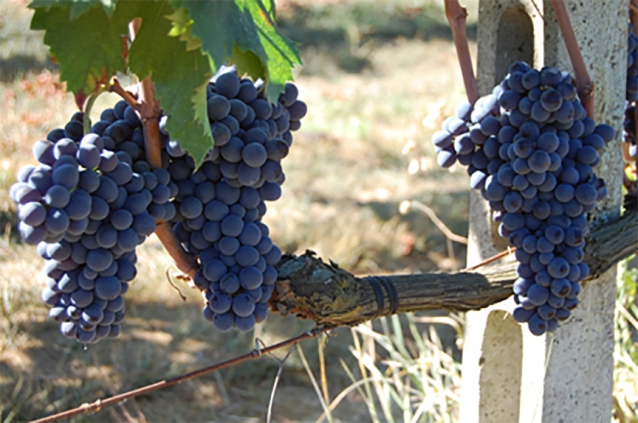 Above: thanks to my connections in the wine trade, invitations to Soldera’s winery and vineyards were extended to me on three occasions. But the first visit, in September of 2008, was the most memorable. Many trade observers would agree that his approach to viticulture was “maniacal.” Those Sangiovese bunches — nearly cinematic in their perfection — are examples of his devotion to his vineyards.

According to at least one mainstream media report, trade members and observers were surprised when Patrizio Cencioni, president of the Brunello consortium, announced that the Sangiovese giant had died in his opening remarks at the gathering.

“He was an emblematic figure,” said Cencioni (according to the piece published online by the Italian national daily Corriere della Sera), thanks to “the great wines he made in the 1980s and 90s. I can still remember a day he came to visit my winery with Luigi Veronelli,” the 20th-century Italian food and wine writer, considered by many to be one of the architects of the Italian gastronomic renaissance and a close friend of Soldera’s. “His impact on Montalcino was profound.”

Above: anyone who’s visited Soldera’s storied Case Basse estate in Montalcino will tell you the same story. The grower and winemaker was most proud of the property’s “white flower garden,” essential, he claimed, to creating biodiversity — a key element in his approach to winemaking.

The author of the Corriere obituary called him “heretical.” My preference would have been iconoclast: even while he was still part of the Brunello consortium (he was expelled and sued by the body in 2013), he was outwardly and loudly critical of Brunello growers and bottlers — even to the point of making him a reviled personage.

“Certainly iconic,” wrote wine writer and natural wine authority Alice Feiring on Instagram upon learning of his passing. “What a character he was. And the wines were sublime.”

Some would argue that he was an ante litteram advocate of the natural wine movement that came long after he had established his celebrity as one of Europe’s premier winemakers.

Above: another feature he was always keen to point out to visitors was the “marsh” he had built. The pond was another important source of biodiversity in an otherwise barren sub-zone of Montalcino.

But the best obituary and tribute to appear so far — whether in Italian or English — were penned by Robert Parker Italian review Monica Larner.

I loved the way she dubbed him the “stubborn genius” of Montalcino. And I highly recommend that you visit the link she provides for the last review of a Soldera wine published by her (the obituary appears on her Facebook while the review is behind the RobertParker.com paywall). She really captures the essence and controversy of his life as a winemaker and she covers the major scandals (or scandalous episodes) that reshaped the arc of his career in the last two decades.

It’s a great piece of writing that could only have been produced by someone like Monica: she has the talent, the experience, and perhaps most importantly the ear to the ground needed to deliver such a compelling piece.

I can’t imagine that profiles by Antonio Galloni and Wine Spectator aren’t forthcoming. And I’ll be looking forward to reading the insights they share.

But I’d also like to point you to this piece (free for non-subscribers) by Jancis Robinson on her site, published just last summer: “Soldera – whom doubt doth not assail.”

Soldera will be remembered, no doubt, as both a champion and denigrator of Montalcino. The wines he grew, raised, and bottled were among Italy’s and Europe’s best. But they were so expensive and the winery’s allocation protocol was so byzantine that they were rarely tasted beyond a tight circle of well-heeled admirers.

Although many will remember him for the controversies he stirred (wittingly and unwittingly perhaps), “now is the time for forgiveness,” as one of my best friends in Montalcino wrote me this morning.

2 thoughts on “Soldera: The “stubborn genius” and “heretic” of Brunello. Remembrances of an iconoclast winemaker.”