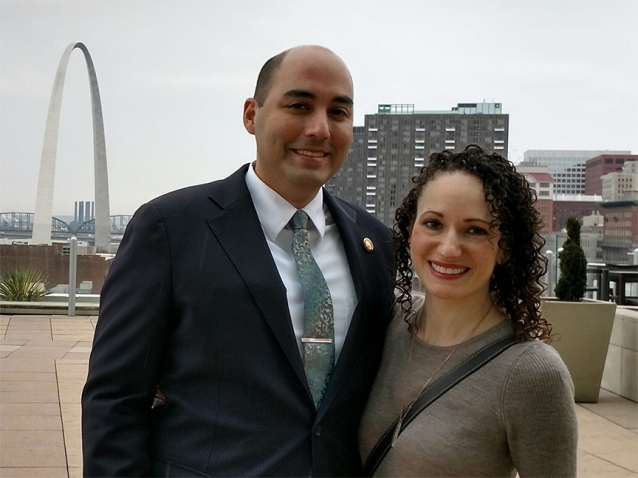 That’s Steven (above), wine director for one of the city’s leading steakhouses, with his wife Adria in St. Louis where he retook the tasting exam after being stripped of his title in the wake of a cheating scandal (photo via Steven’s Facebook).

Steven wasn’t involved with the malfeasance in any way. But he was one of 23 erstwhile Master Sommeliers whose newly earned titles were “invalidated” by the Court of Master Sommeliers more than a month after the group’s coveted pins had been conferred.

And for more background, information on steps the Court has taken to rectify the situation, and updates on some of the candidates who didn’t pass the “reset” (as its called), see this excellent reporting by Seven Fifty Daily contributor Courtney Schiessl.

Tracie and I live in the same neighborhood as Steven and Adria. Our kids go to the same school. We eat breakfast at the same diner. They are among the nicest people we know in Houston’s wine community. A great family and great people, all around.

We couldn’t be happier for them that this stressful ordeal is now over.

In other Houston wine news…

Celebrity sommelier Jeff Porter and celebrated Italian ampelographer Ian D’Agata will be leading two days of seminars and tastings tomorrow and Wednesday at the Houstonian hotel and resort.

Jeff tells me that all sessions are wait-listed but he encourages local wine professionals to sign-up regardless because spots will surely become available.

Ian’s book on the Native Wine Grapes of Italy (University of California Press 2014) has become required reading for Italian wine-focused tradespeople. I use the online version (Google Play) nearly every day.

It’s so cool that Jeff is bringing him to our city.

And in other other Houston wine and music news…

Houston-based journalist and author Gwendolyn Knapp (above, right) and I will be playing a set of her music as The GoAways this Sunday at one of the city’s favorite wine bars, 13 Celsius.

Weather permitting we’ll be do roughly 45 minutes of music in the venue’s beautiful courtyard (above) at 3 p.m. Two other bands are slated to play and it should be a great time and a great way to get together before year’s end.

I hope you can join us!

So much time and so little to say: I have so much material to post from my last trip to Italy, including some really juicy good stuff. Please stay tuned!