Manhattan was abuzz with ministerial week at the UN when my taxi brought me to the city yesterday.

But the back room at Morrell Wine Bar in Rockefeller Center was peaceful as a group of Nebbiolo collectors sat down for an extraordinary flight of wines stretching back to the 1960s.

Moved by their generosity, they had asked a lonesome Texas wine blogger to join them.

It’s hard to say that any one wine was better than the other last night. Aside from one bottle that had clearly peaked some years ago, all the wines were extraordinary and each would have been a joy to drink in its own right.

They were served blind and every guest offered impressions and speculations as the group tasted. 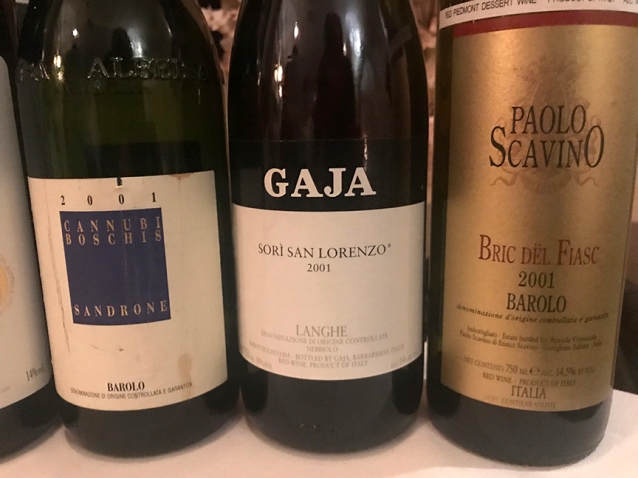 Most agreed that the standouts in the three indisputably illustrious flights were the Produttori del Barbaresco 1990 Barbaresco Asili and the Bruno Giacosa 1990 Barbaresco Riserva (Red Label). According to at least a couple of the tasters, the 1990 vintage was the only Giacosa Barbaresco riserva that he ever released without vineyard designation.

Both were vibrant, fresh on the nose, and rich with fruit. The Produttori del Barbaresco was in a state of grace, perfectly ready to drink. The Giacosa would have had many years ahead of it had it not been opened.

It was also a treat to see the old Roagna label from an era before the estate developed its distinctive black and white lettering.

The Gaja 2001 Sorì San Lorenzo was also remarkable, still very young in its evolution but a pleasure to drink as it was beginning to reveal its fruit.

Heartfelt thanks to my dear friends Ken Vastola who “sponsored” my participation and Eric Guido (above) who organized the excellent dinner and superb wine service.

Ken is the author of the immensely useful Nebbiolo-focused online portal Fine Wine Geek. He is particularly dear to me because he knew my Uncle Manny Parzen. And he is the sweetest man, a genuine mensch.

Eric runs Morrell’s online program and holiday catalog and he is also an executive buyer for the operation. He is one of the most remarkably productive and talented people I know in the biz.

I only had a moment to look at the wine bar list, now run by Anna-Christina Cabrales. In another era, wine insiders wouldn’t expect much from a midtown list like this. But Anna has transformed it into a fantastic program that offers something for everyone, from the New Yorker executive and tourist to the wine überhipster (Lieu Dit Santa Ynez Sauvignon Blanc by the glass, anyone?).

Wow, what a night! Thanks to all the folks who made me part of it. A wonderful time and a great way for a lapsed New Yorker and lonesome Texan to come home.