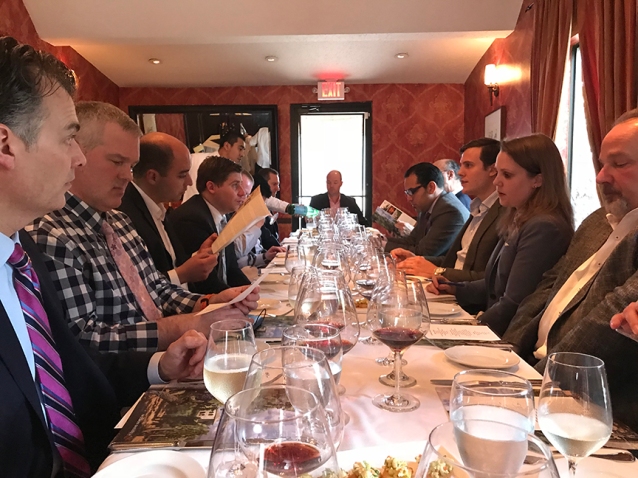 Top wine buyers from across Texas gathered yesterday in one of Houston’s most exclusive private dining rooms to taste new vintages from the iconic Biondi Santi winery. The estate’s new ambassador, Tancredi Biondi Santi (seated above, mid-table on the right, across from Master Sommelier Jack Mason), led the tasting.

The séance — organized by Biondi Santi’s new U.S. importer Wilson Daniels — would have been otherwise unremarkable if it weren’t for the fact that the wines haven’t been available in the state through legitimate channels for decades.

“The wines have mostly come in [to the U.S.] through the grey market,” said one of the Wilson Daniels sales managers present at the swank luncheon.

He was referring to the questionably legal practice of importing of high-end European wines without using the so-called “three-tier system.” Most fine wine arrives here through an importer who sells it to a distributor who, in turn, sells it to a retailer or restaurateur who ultimately sells it to the end user — hence the “three tiers.” Historically, trade operators have often skirted the system (and its sometime prohibitive costs) by shipping the wines directly to the U.S., sometimes through illegitimate channels (for example, by misleadingly labeling the boxes as products other than wine, one of the world’s most highly regulated commodities).

Since the late 1990s, the sole purveyor of Biondi Santi in the U.S. has been Italian Wine Merchants, a retail operation headquartered in New York and once co-owned by Joe Bastianich and Mario Batali. In 2015, the upscale wine shop and broker was still offering back vintages to clients willing to shell out up to $1,500 per bottle, according to Eric Asimov writing for the New York Times.

Following the 2013 passing of the family’s patriarch Franco Biondi Santi (Tancredi’s grandfather), many Italian wine trade observers speculated that the winery would abandon his unwavering devotion to traditional-style Brunello di Montalcino in favor of a more modern approach.

As Eric wrote in his 2015 piece, Biondi Santi is considered “perhaps the greatest of all Brunello producers, but one whose style was roundly assailed in the 1990s and the first decade of this century.”

All eyes were on Franco’s son (and Tancredi’s father) Jacopo. In the eyes of some pundits, he had already shifted the winery’s stylistic direction, even before his father’s death.

Yesterday, the young Tancredi told buyers that all the wines are aged in the traditional large Slavonian oak casks that his grandfather, and great-grandfather Tancredi (his namesake), used to raise them.

“Barriques are not allowed,” he said referring to the small French oak casks that many Brunello producers use today in order to appeal to American and northern European sensibilities.

In my view, it’s really exciting news that the wines will finally be available outside of New York. And it will also be interesting to follow the winery’s evolution under Jacopo and Tancredi. The younger Biondi Santi also talked openly about his desire to become the farm’s winemaker once his father steps down. He’s currently studying enology, he said.

I’ve had the great fortune to taste the wines on numerous occasions in Italy, including a lot of older vintages over the years. That’s not something a lot of American wine professionals can say. The fact of the matter is that few sommeliers in America have had any contact with these wines at all. But my concern today is that Wilson Daniels’ pricing will still keep these iconic wines out of reach for most young wine professionals. The 2011 reserve we tasted yesterday will cost more than $1,000 on a typical high-end wine list in the U.S.

Are the wines worth the high price tag? Most of us will never know.

One thought on “Biondi Santi rebrands in U.S. with luxury importer Wilson Daniels”