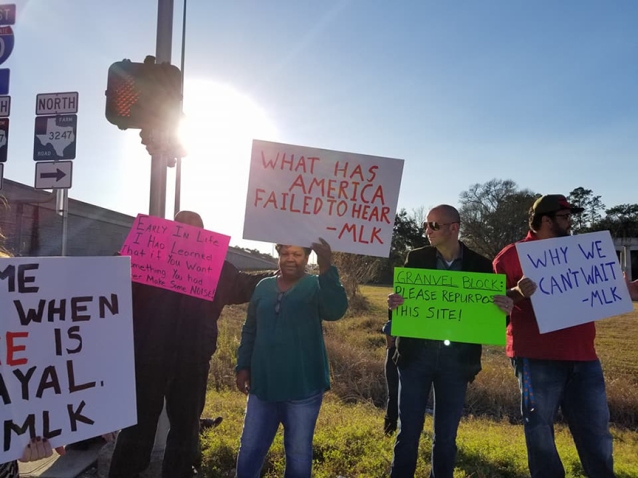 Join us in PROTEST of the Confederate Memorial in Orange, Texas:

ABOUT THE REPURPOSE MOVEMENT:

The Repurpose movement and blog were founded in December 2017: through protests and lobby efforts, we advocate for the repurposing of the Confederate Memorial in Orange, Texas.

Erected in 2013 at the intersection between Martin Luther King, Jr. Dr. and Interstate 10 by the Sons of Confederate Veterans, the monument has been publicly condemned by the City of Orange municipal government:

“The City Council of the City of Orange, Texas,” wrote the authors of a Orange City Council official declaration in April, 2013, “strongly opposes the Confederate Veterans Memorial Park on its current design and location; and urges the Sons of Confederate Veterans, Inc. to consider alternative designs and locations that express the sacrifice made in an appropriate and acceptable manner to all.”

Despite efforts and appeals by local politicians and business and religious leaders, including the city’s offer to purchase the land, the Sons of Confederate Veterans [SVC] have refused to consider any alternatives to this hateful monument.

The city has managed to limit the height of the monument’s flagpoles (thus ensuring it won’t be visible from the interstate) and it has stymied the completion of the site by forcing the SCV to create ample parking, including parking for the disabled. Currently, the SCV doesn’t own enough land around the monument to build the parking spots.

But because the site sits on land privately owned by the SCV, the city cannot force the group to repurpose it.

Please join and support our cause by attending our protests and sharing this page.