Touch it, feel it, kiss it, smell it, taste it…

My favorite Franciacorta — Arcari + Danesi by my good friends Giovanni Arcari and Nico Danesi — is FINALLY available in Texas thanks to importer and distributor Rootstock (thank you, Ian and Nathan!). I picked up a case yesterday at the Houston Wine Merchant. But wherever you live, just ask your favorite wine merchant to order it for you. It’s now available in Texas.

The 2013 Franciacorta Dosaggio Zero is 90 percent Chardonnay and 10 percent Pinot Blanc fermented in stainless-steel and aged on its lees for 30 months. While many Franciacorta producers are leaning toward monovarietal Chardonnay wines, Giovanni and Nico’s use of Pinot Blanc (the traditional cuvée in Franciacorta) gives the wine a wonderful aromatic character. And thanks in part the balanced 2013 vintage (one of the best of the decade so far imho), the wine’s rich stone fruit flavors play beautifully against its lip-smacking minerality. The wine isn’t topped off when it’s disgorged and bottled (no added sweetener) and its own reserved grape must (from the same vintage) is used to provoke the second fermentation during tirage. Nothing but grapes are used to make it (no cane sugar is employed). The sweetness that you taste when you drink it is the natural flavor of the fruit. What a wine, people!

It’s what Tracie and I will be serving at our Hanukkah latke party this week. A great pairing btw.

My recommendation? Run don’t walk to your nearest wine shop: Texas received a limited amount of this highly allocated wine and I just depleted another case! Seriously, this is a wonderful wine for the holidays and the dudes who make it and import it couldn’t be nicer folks.

And speaking of the Festival of Lights… 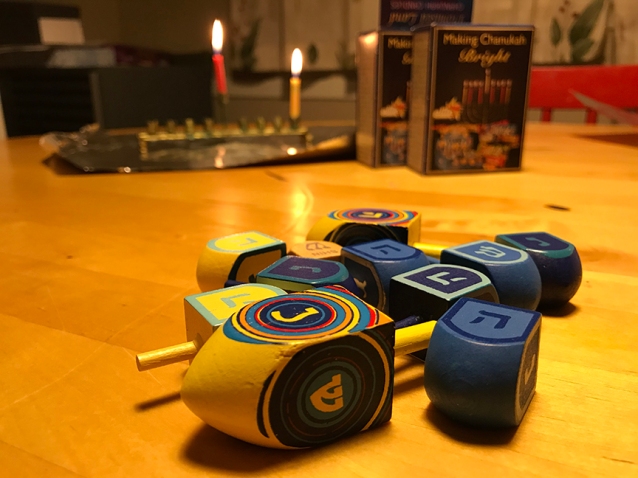 The Parzen family celebrated the first night of Hanukkah last night with candle lighting, dreidels, and donuts (a traditional Hanukkah food because they are fried in oil).

The miracle of Hanukkah was sweetened by the fact that ALABAMA IS SENDING A DEMOCRAT TO THE U.S. SENATE! The news is a bright ray of hope in this dark time in America.

When Moore’s wife gave her “some of my best friends are Jews and blacks speech” the night before the election, she and her husband managed to take civic discourse in this country to a whole new low. The best line was “my attorney is a Jew.”

Anyone who denies that anti-semitism is on the rise in this country is either blind or a fool. Or worse… Had Alabamans sent Moore to the senate, they would have reaffirmed the GOP’s new Trumpian embrace of racist-driven politics and its current abandonment of Christian values.

G-d bless Alabama for doing the right thing! Finally, Americans have stood up for what is right instead of acting like dumb sheep who hope Trump will make America white again.

The Maccabees of the Hanukkah narrative stood up to a tyrant who wanted to impose his religious beliefs on them. Moore made it very clear that in his view, Christianity — or at least the hate-filled pseudo-Christianity that he and Trump and their supporters believe in — was the only religion that should be allowed in our country.

BLESSED BE THE SOVEREIGN OF THE UNIVERSE FOR THIS MACCABEE MIRACLE!

And thank you, Alabamans, for embracing humanity over hate. G-d bless America.

One thought on “My favorite Franciacorta is here in Texas! And it sweetens last night’s Maccabee miracle. Happy Hanukkah y’all!”