Tracie’s uncle Terry Johnson, Tracie’s mother’s brother and my uncle by marriage, published the following post yesterday on his Facebook. Terry, Tracie, and nearly the entire Johnson family grew up in the city of Orange on the Texas-Louisiana border in Southeast Texas. That’s Terry, below, in the very last row, at our wedding in January 2010 in La Jolla, California where I grew up. And that’s the extended Johnson family surrounding Tracie and me, including Reverend Randy Branch, Tracie’s father, who officiated (to Tracie’s left, standing behind her mother Jane née Johnson).

Terry wrote the post after he read the post I published yesterday, “‘Jew will not replace us’: looking to Dante for the origin of anti-Semitic hate speech.”

The Washington Post reported today that a “White Lives Matter” event scheduled for September 11 on the Texas A&M campus (a two-hour drive from where we live in Houston) has been cancelled by the university. In a statement, the event’s would-be organizer described it as “Today Charlottesville Tomorrow Texas A&M.”

Thank you, Terry. I love you, too. Thank you for your words of solidarity and thank you for the way your family has embraced me so lovingly. 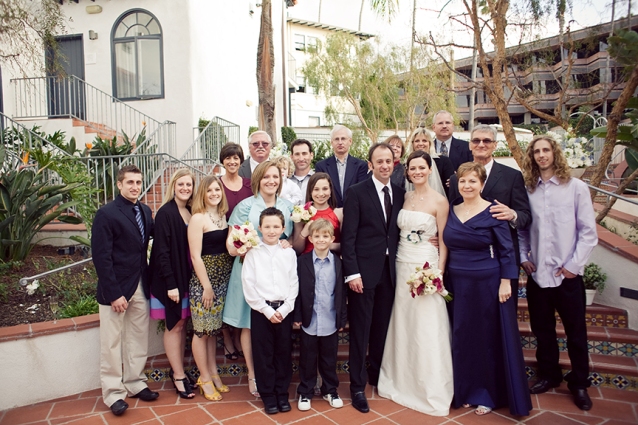 I am sharing this because I want to stand up against that despicable event in Charlottesville.

Jeremy Parzen is MY nephew. He married my beautiful niece Tracie Parzen. W[est] O[orange]-S[tark High School] Class of ’94. Jeremy is an extremely learned scholar. He grew up in beautiful La Jolla, CA. Many in the Johnson family went out to La Jolla for their wedding. It was an experience that my family will forever remember. We created family memories that we will always have. He is Jewish. He is very well-known for writing several blogs. He is one of the best fathers, to my two beautiful, great-nieces. Georgia Ann Parzen (named after our beloved mother RIP 😥) and Lila Jane (as in Jane Branch [Tracie’s mother] from the mere rock-throw proximity on Smith St. by Mustang Dan R. Hooks Stadium).

They are a beautiful family that is targeted in the hearts of these ilk of humanity White Supremacists. It hurts in their hearts to see.

Tracie Branch Parzen, you married a wonderful person that I am proud to call my nephew.
Jeremy, I stand with you PUBLICLY, to renounce this crime of hate. It does not represent the love that you know OUR family shares. It is sad. You are MY nephew. I would give my all to protect that. Honestly!

I know that I have some “friends” that ridicule me for some of my posts as “grand-standing”. I could care less. Think whatever you want. Those that know me well, know me to be passionate about people, things, and causes, that I hold dear.

I will not be part of the silence on Facebook about this atrocity. It effects my family. These beautiful people I describe. It hurts their hearts. Therefore, it hurts mine. Tracie is this wonderful little girl who grew up being an Orange, TX kid. She went to the University of Texas. A Longhorn girl. Just a normal life. Now, married a man who happens to be Jewish. Just like our Savior! This hate against our FRIENDS, Jewish, Black, and whoever else that group targets, is horrific.

How can there be so much silence when Facebook pages are blown up on timelines regarding so many trivial things? We have FRIENDS and FAMILY that this touches and effects. Jane and Randy, I love your son in-law and he is part of my family, and journey. It’s shameful that Georgia and Lila will have to explained to about biases.

Russell Turkel (I call him “3-0”), you are not just the kicker who sent that pigskin through those uprights in 1987 to beat Jasper in that epic game many of us still cherish, you are our Friend. Like Jeremy, I stand up for you! I standup for every black friend I have. My TRUE friends know me to love, regardless of pigment (how dumb). I standup for every black kid that ever put on that Silver helmet to be a Mustang. I love you in my heart, and am not silent. Our country still feels the pain of the treatment we witnessed as kids. I will forever cherish that I went to Wallace Elementary with you! It’s a treasure along my path.

I totally recognize that the MAJORITY of America does not like this hate. It’s sad that all the love we all have among us, is tainted by those sorry outfits. But, silence is not golden, at this juncture. My family is so important in my heart. As are my friends that are Jewish, or Black. I love you!