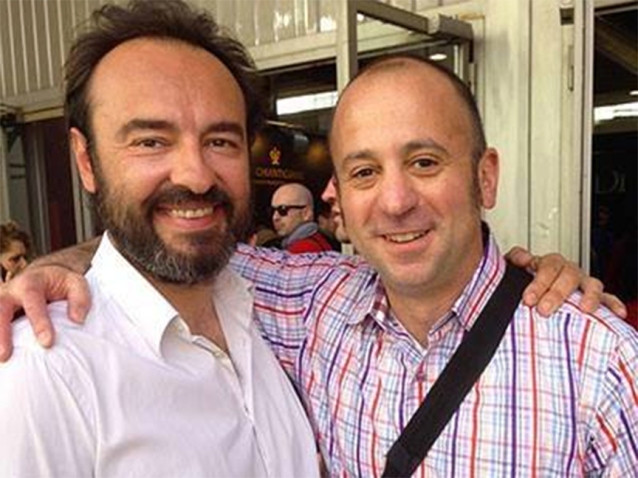 Franciacorta winemaker Giovanni Arcari (above, left) and I first met back in 2008 in Erbusco in the heart of his appellation. We immediately hit it off and became fast friends. But it wasn’t until I was invited to speak at the European Wine Bloggers Conference in Brescia a few years later that our friendship began to blossom (Brescia is the capital city of Brescia province, which includes the Franciacorta appellation).

Even in those early years of our relationship, we talked about working together. But I was already working with another Franciacorta producer by that point. That partnership was so fruitful that it lead to a two-year campaign that I ran for the Franciacorta consortium.

As our friendship grew deeper and deeper and the years passed, Giovanni and I were disappointed not to be working together. But he always insisted that the appellation came first and he was unabashedly supportive of the program I ran for the bottlers’ association.

In December 2016, after 24 months of blogging, traveling across the U.S. leading tastings, and bringing writers to Franciacorta to raise awareness of this extraordinary appellation and its often spectacular wines, I felt it was finally time to move on. I’ve been thrilled by the results obtained and the full-fledged support that the consortium gave me throughout my tenure there. But it was time to turn the page, as the adage goes.

And where one chapter in life comes to end, another begins: I’m overjoyed to announce that I’m going to be helping out with promoting Giovanni’s wines in the U.S.

Giovanni and I are going to kick things off with two tastings this month:

I’ll be posting the details in coming days and sharing on social media. But please save the dates if you’re in Southern California then. Thanks in advance for your support!

There’s so much more of this story to tell: I’ve just taken over Giovanni’s “SoloUvaUSA” English-language blog where I’ll be posting regularly there on our adventures, the wines, and their reception in the U.S.

But I couldn’t publish this post and launch this project without a nod to Giovanni’s better (winemaking) half, Nico Danesi (above, left).

He’s also become a cherished friend over the years and he’s one of the most interesting and intellectually provocative winemakers I’ve ever met (he also commands an encyclopedic knowledge of film and film history, our favorite subjects after Wittgenstein).

He and Giovanni conceived what is known as the SoloUva method, the “just grapes” approach to the production of Franciacorta wines. I’ll be sharing more about the method in upcoming posts on the SoloUvaUSA blog.

Read about the SoloUva method here in the meantime. And check out the song I wrote about it a few years ago here or below.

All we need is grapes! Thanks for your continued and future support. And thanks for believing in me and our crazy dreams.

Giovanni and Nico, I love you guys! Giovanni, see you soon in the U.S.!

One thought on “Taste bubbles (and sing) with me and my bromance Feb. 25-26 in So. Cal: All We Need Is Grapes”