Above: Irpinia, the wild volcanic highlands of Campania where some of Italy’s most extraordinary wines are raised (click the image for a higher-resolution version.

Of the nine trips I made to Italy this year and the literally hundreds of wines I tasted, one of the most remarkable visits was with Daniela Mastroberardino, co-owner of the Terredora winery, who took me on a tour of her family’s vineyards in Montefusco township in Irpinia, Campania’s wild volcanic highlands.

Like many U.S.-based Italian wine professionals, I’ve logged countless hours of vineyard tours and winery tastings in northern Italy between Piedmont, Lombardy, Veneto, and Friuli. And there are few Tuscan hilltop villages between Montalcino and Rùfina that I haven’t visited over the nearly 30 years that I’ve been traveling to Italy.

Of course, I’ve also tasted (and have drunk with gusto) more than my fair share of Irpinia wines: Taurasi, Fiano d’Avellino, Greco di Tufo are all appellations whose wines are increasingly available to American fine wine consumers like me. But until this year, I had never spent any time with those wines in situ.

What a revelation to tour these forgotten, untamed hills of southern Italy’s wine country! As we drove up and down the steep roads that lead to and from Montefusco village (one of the hubs of Irpinian viticulture), I remembered hearing Italian wine maven Charles Scicolone talking about his early visits to Italy in the 1970s, when Italian farmland was just beginning to be developed by big industry. “There were vines everywhere,” he would tell me, noting that the Italian countryside has been radically transformed since those years. Driving through Irpinia, I imagine that it resembles the Italy that Charles saw when he first visited some 40 years ago.

Above: the only industry in Irpinia is grape growing and winemaking, Daniela explained. These highlands, with their volcanic top soil, are bordered on every side by active and extinct volcano mountain chains. As you drive from Naples up into the hills and then past Avellino, your ears begin to pop from the change in altitude and you enter into a viticulture landscape seemingly suspended in the sky with volcanoes as its moorings (click the image for a higher-resolution version).

Although fine wine has been produced in Irpinia for millennia, the volcanic top soil — mostly the fallout from ancient eruptions on Mt. Vesuvius, I was told — played a fundamental roll in the development of the wine trade here in the 19th century: the tiny grains of volcanic sand that form the top layer of farmland here made it impossible for phylloxera to thrive. Echoing what grape growers told me in Santorini, for example, the little creatures simply can’t negotiate the fine soil (or as one winemaker put it, they can’t jump from one grain to the next, making it impossible for them to survive). 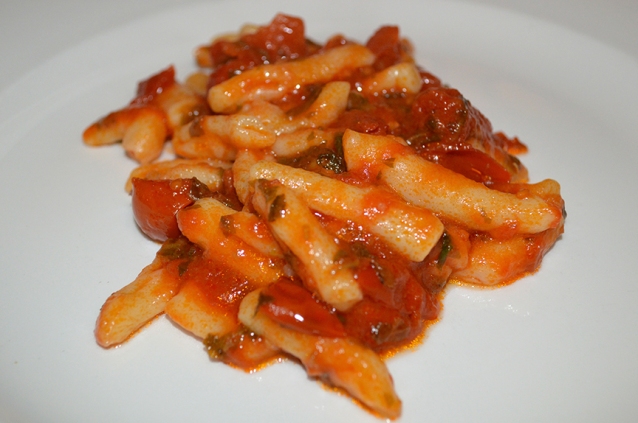 Above: one of my top meals of 2016 was at the Antica Trattoria di Pietro dal 1934, where Daniela treated me to these Campania-style cavatelli (different from Puglia-style) dressed with tomato and wild herbs. This dish and the entire meal at Pietro alone would have been worth the journey. Di Pietro doesn’t seem to have a website but it does have a website but it does have a Facebook. Note to Italian gastronauts: seek this place out and you won’t be disappointed. And note to Italian wine connoisseurs: a deep-reaching cellar brimming with older vintages of Taurasi, including the 1998 Terredora that I enjoyed thoroughly.

The other revelation for me was tasting current and older vintages of her family’s wines with Daniela. As she opened an unforgettable flight of wines from the 2000s and even late 1990s, I was reminded of what a wise wine buyer told me many years ago in Austin: trust the wine, not the story.

Daniela’s wines have always been marketed and positioned as excellent restaurant-friendly expressions of Campania winemaking, with an emphasis on their modern-style and their appeal to modern sensibilities in wine tastes. And her family’s wines are immensely successful in the U.S., where you can find them on a wide range of wine lists.

But as we tasted over dinner and tasted through the wines, and then the next day, as she gave me and a pair of Milanese wine merchants a tour of Irpinia wine country, I realized that no one had every told me the real story of these wines. There’s a lot more soul in these bottles than I think a lot of people understand. To see the pristine wild areas where they are grown and to hear the tale of blood, sweat, and tears that the Mastroberardino siblings (the children of Walter Mastroberardino) shed as they built a winery from scratch in the earthquake-prone highlands in the 1990s, I began to wrap my mind around these wines and what they mean in the context of Irpinian viticulture.

Above: this 1998 Taurasi was just one of the older vintages of her family wines that Daniela opened for me. What an eye-opening wine! Very fresh, with perfectly integrated wood and super vibrant fruit flavors. Tasting this wine and learning the story behind it, really helped me to understand what these wines are about.

I also really loved an older vintage of Fiano that she poured for me: with aging these wines achieve nuanced layers of fruit and mineral flavors, notes that you miss — I believe — when you taste the current vintages.

When I really took the time to learn more about the places where they are grown and to taste them patiently and in context (and not just wine a sales rep who’s pulled them out of a chilled wine bag on a hot summer day in Los Angeles), I realized that these wines have a lot more substance than their deep-punted California-style bottles reveal at first sight.

Both the 1998 classic Taurasi and the 2004 single-vineyard Taurasi Pago dei Fusi (which I don’t believe is available in the U.S.) really blew me away with their sheer beauty. Great wines with a great story that has yet to be told…

Thank you, Daniela, for the wonderful visit and the gracious hospitality. That was such an eye-opening and memorable visit!

This is just the first in my series of posts from Naples and Campania. Stay tuned and thanks for being here…