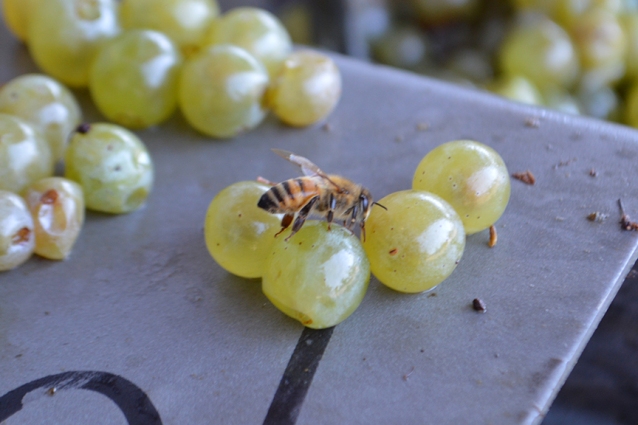 Above: grapes harvested in August 2015 at Ca’ del Bosco, another one of Franciacorta’s “big three” and another winery experimenting with organic farming practices.

It’s a powerhouse estate that produces a wide array of wines, ranging from under $15 a bottle to around $65 (according to WineSearcher.com results retrieved today).

And with Berlucchi’s ongoing conversion to organic farming and certification process, Franciacorta has crossed an extraordinary threshold: today, more than 50 percent of the appellation is organically farmed.

Today, I posted an interview with Berlucchi CEO and enologist Arturo Ziliani on Franciacorta Real Story, a blog I author for the Franciacorta consortium. In the post, he discusses the genesis of the conversion and its significance in Franciacorta’s bigger picture, including the likelihood that it will become 100 percent organic.

Over the last two months, I’ve had the opportunity to meet with two of Italy’s natural wine pioneers and founders of its leading natural wine fairs: Giampiero Bea of ViniVeri and Angiolino Maule of VinNatur.

In our interactions, each made analogous remarks about the arc of the natural wine movement in Italy: in the 90s, they were considered fringe; in the 00s, they were called crazy; and today, the mainstream has begun to embrace their call for chemical-free agriculture in Italy and across the world.

Both of them pointed to the ViVit and the VinitalyBio pavilions at the behemoth Vinitaly, Italy’s annual wine industry trade fair held in Verona, as examples of this. The fact that “big” Italian wine has included a natural wine ghetto (the former) and an organic wine ghetto (the latter) represents a substantive break from convention and a milestone in their mission to raise awareness of natural and chemical-free viticulture.

And both of them pointed to the fact that every day it seems that another large winemaker or winery group announces its conversion — whether complete or partial — to organic and more environmentally friendly (and human friendly) farming.

Will the relevance of natural wine be negated as more and more mainstream wineries embrace the tenets of natural and organic wine?

Perhaps. But it doesn’t matter because ultimately, having reached for the stars, they will have delivered the earth.

That fact that the “powers-that-be” in Franciacorta are looking at becoming Italy’s first 100 percent organic appellation is surely a step in the right direction.

Click here for the interview with Arturo Ziliani of Guido Berlucchi.