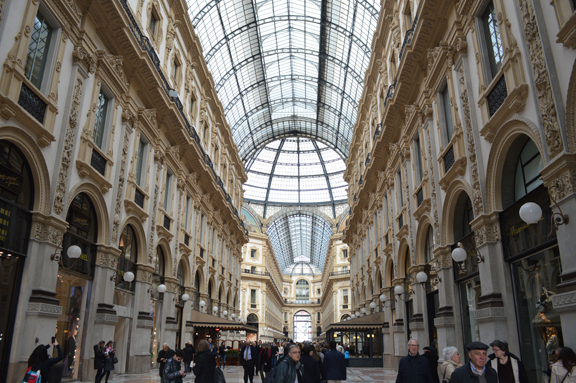 Above: a view of the Galleria in the historic center of Milan. The city is so much more than just “art and amazing churches.”

“Should I spend an extra day in Milan after a wine trip?” asked Houston-based sommelier Vanessa Treviño-Boyd on her Facebook the other day. “So far the savvy say ‘not worth it.'”

A number of wine tradespeople weighed in, with varied responses.

“If you like art and amazing churches, yes,” wrote venerated Italian wine critic Levi Dalton. “If not, no.” (Please accept my apologies in advance for the Google alert, Levi.)

It’s disheartening to see exchanges like this. But it happens all the time: wine professionals head to Italy for winery-funded trips and they head straight to wine country and then back to the airport without experiencing Italy’s immeasurable cultural treasure.

In many cases, especially for young people, it’s their first trip to the country.

It’s such a pity to see wine eclipse art, culture, and — in this case — one of Europe’s leading gastronomic destinations. It’s as if people like Levi, even with his vast knowledge of Italian viticulture, only saw a dichotomy and divide between wine and culture.

Above: the Duomo of Milan is certainly an “amazing” church but there’s a lot more to it than that.

My recommendation to Vanessa was to dine at Pont de Ferr, a Michelin-starred restaurant in the city’s Navigli district (I wonder you’ve ever visited the area, Levi; if you have, you surely know that Milan is much more than just “art and amazing churches”).

The navigli are a series of canals designed by Leonardo da Vinci (commissioned by Ludovico Sforza). It’s one of the most beautiful parts of the city and it’s also home to one of its many gastronomic epicenters. It’s a great place to take a stroll and take in the city on a spring evening. An aperitif is recommended before sitting down to dinner…

Milan teems with great restaurants, from the expensive Michelin-starred venues to the affordable trattoria (I like Antica Trattoria della Pesa). It’s also one of the best places in Italy — believe it or not — for Neapolitan and Pugliese seafood (because so many southerners live there).

But there’s also so much more: the Teatro della Scala, the old Feltrinelli book shop on Via Manzoni, the shopping on Via Montenapoleone (not that I can afford it), the Pinacoteca di Brera (pinacoteca means art museum, in case you didn’t know, Levi), the Basilica di Sant’Ambrogio (another “amazing” church and one of my favorites)… I could go on and on.

Milan is also the fashion capital of the world (not just Italy or Europe, Levi, the world!).

Milan is also one of Italy’s major publishing hubs.

Milan was the city of Carlo Emilio Gadda (Ever read him, Levi? You’d really love his work, I’m sure.) Milan was a city where Petrarch spent a great deal of his life. Milan is the city of Luigi Veronelli…

As wine professionals, we mustn’t allow wine to elide art and culture.

After all, humans could live without wine but humankind could not thrive without art and culture. Art and culture are the means by which we reflect on the nature of our existence. Wine is a beverage that sometimes tastes good and helps with digestion.

“Being into wine” shouldn’t preclude “being into art and churches.” Knowing a little about those works of art and churches actually makes the experience of wine so much more meaningful than just tasting wine in a vacuum.

Thanks for being such a good sport about this, Levi! I know what a thick skin you have!

6 thoughts on “Italy is so much more than wine”