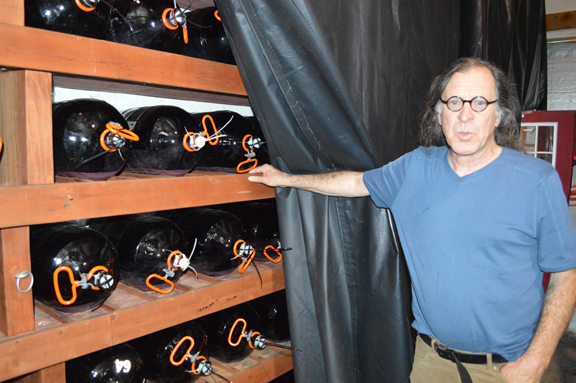 A few months ago, when Giovanni Arcari and team sparkling wine asked me to lead them on a tour of California winemaking, my first email was to Randall Grahm (above), the pioneering winemaker who has reshaped the viticultural landscape there throughout this century and the last.

And so we headed from Los Angeles last Thursday to Santa Cruz where the tidy Bonny Doon offices and winemaking facility are sandwiched quietly between a brewery and a handful of winery tasting rooms (you can see some of Giovanni’s images from our drive here).

I knew that Randall was Italophile in his winemaking and that in the last few decades his interest has shifted toward Italian grape varieties. But I had no idea that he’s also Italophone: he conversed with my sparkling companions in their native tongue, just like grape grower and winemaker Thomas Jefferson, who famously spoke to Tuscan sailors in the language of Dante thanks to his knowledge of the Comedy.

Before we sat down to taste a selection of his wines, he showed us the demijohns he’s using to age some of his wines (in the photo above). He stirs their lees, he explained, with an inert, teflon-lined metal ribbon that resides in the demijohn. The cellar workers run a magnet along the side of the vessel, thus guiding the ribbon through the wine and stirring the lees. 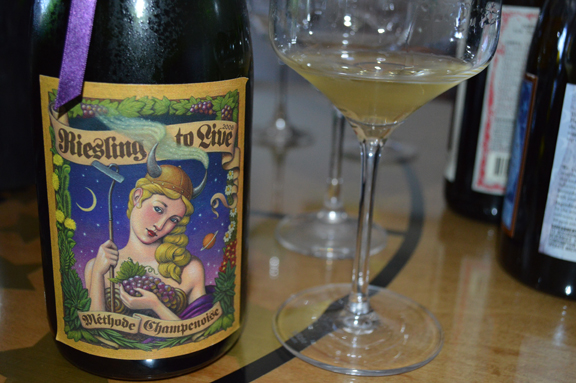 It was only natural that Randall would open the flight with one of his méthode champenoise wines, the 2006 “Riesling to Live” made with grapes from the Ca’ del Solo vineyard in Monterey (which Randall subsequently sold).

This wine made such an impression in my memory that I can still taste it as I write this: zinging acidity and bright white and citrus notes with a salty lemon finish. Now in its eighth year, this wine is full of life. 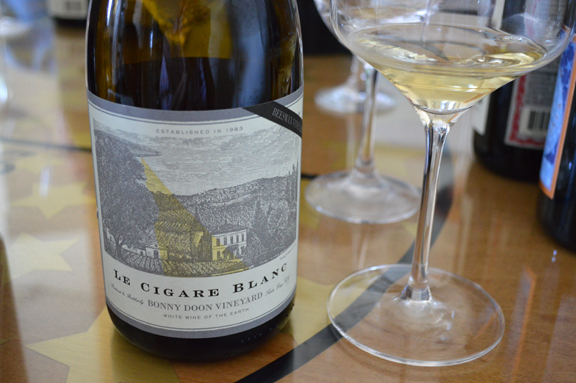 The 2011 Cigare Volant white was another favorite of mine in the flight. Rarely do you taste California white wines with this depth and character. The stone and dried-fruit notes were enhanced by an “unbearably light” mouthfeel and a graceful unctuousness that really turned me on. Randall said you should be able to find this wine for around $25. Can you name a better value in Californian wine today? 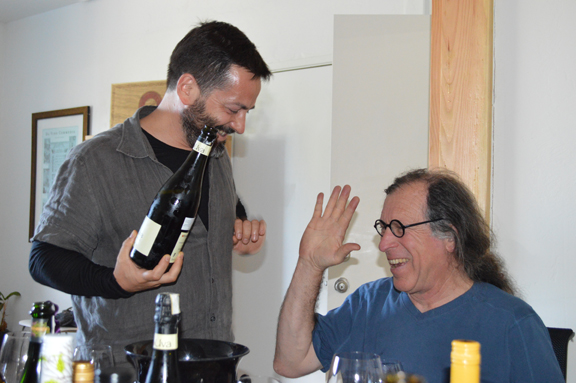 There were many other standouts in the roughly sixteen wines that we tasted together (including the 2007 Ca’ del Solo Nebbiolo, which was without a doubt the best Nebbiolo I’ve ever tasted from California, truly delicious and satisfying; also the 2009 Cigar Volant red reserve aged in demijohn, so rich and so alive in its flavor, a wine that I pined to drink with dinner that night). And of course, it was remarkable to see so many of Randall’s bottles lined up side-by-side and contemplate their wonderful labels and their idiosyncrasies.

But most compelling was Randall’s discourse on creating a vino di territorio, a vin de terroir, in California, where the youth of viticulture often casts the grape grower in Limbo.

As he explained his efforts in crossing grape varieties in the same vineyard as one of the means to create a truly unique bioscape, I couldn’t help to think of him as a Virgil, planting the semina vertatis of a terroir in fieri.