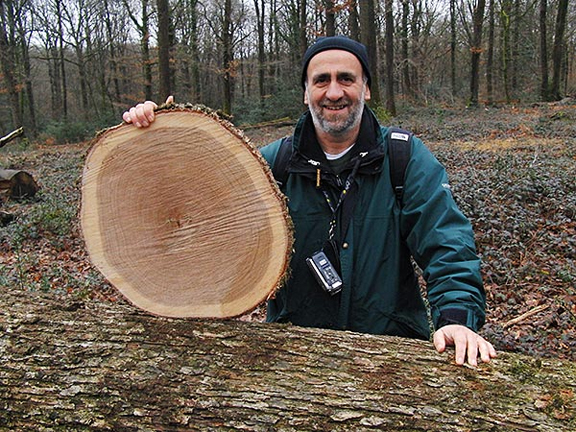 Above: Wine writer, journalist, educator, publisher, blogger Maurizio Gily visited the Tonnellerie Chassin in Burgundy in 2011 (image via Tonnellerie Chassin). He reported his notes from the visit in an essay entitled “France and its Wooden Treasure: from forest to barrique, a heritage managed sustainably and safeguarded by the French government.”

Italian enonauts continue to reel in the wake of news that beloved Italian wine writer Maurizio Gily has been ordered to pay €5,000 to so-called journalist Paolo Tessardi for damage to the latter’s reputation in a blog post published in 2008.

The bottom line: Tessardi’s reporting of an Italian government investigation into wine adulteration in 2008 was inaccurate and sensationalistic; and Gily’s attempt set the record straight was vindicated by the fact that Tessardi’s claims proved to be untrue.

As Antonio Tomacelli noted on the popular wine blog Intravino today, Tessardi was censured by his editors at the time. The title of Antonio’s post: “Whisper the truth, shout the lie.”

Even the judge who presided over the case noted that Gily’s facts were correct. But Gily should have “shown more discretion” in “attacking” a colleague, he wrote.

Dulcis in fundo, here’s the icing on the cake: Tessardi only read Gily’s blog post three years later when everyone had forgotten about this sad episode in the annals of yellow-tinged Italian journalism!

The shocking and now infamous “Velenitaly” (Poisoned Italy) cover was on every newsstand. There was hysteria in the air. There were rumors that Italian paramilitary forces had stormed the fair and confiscated wine. With echoes of the 1986 methanol scandal, the damage to consumers’ perceptions of Italian wine was palpable.

Gily and his blog were Davids to Tessardi’s Goliath: L’Espresso, the magazine that published Tessardi’s sloppy reporting, is one of Italy’s top glossy weeklies, akin to Newsweek except for the liberal depictions of the female body in the former.

Maurizio is a wine writer, publisher of an excellent trade magazine and blog, Mille Vigne (A Thousand Vines), editor of numerous works devoted to Italian enology, an educator and lecturer, a scholar, a wine industry consultant, and one of the sweetest people you’ll ever meet in the world of Italian wine writing.

I have traveled and tasted with him and I have the utmost respect for his integrity and his professionalism.

And this whole thing just makes me sick…

Above: that’s what I am feeling right now. Who is that man? It’s Umberto D.

4 thoughts on “When wine writing really gets ugly: the sad truth about the Gily-Tessardi affaire”

Sunset yesterday at my mom’s. That was a good one, paired well with @castello_di_verduno #Pelaverga and grilled mahi mahi fish tacos from #BahiaDonBravo #LaJolla