Above: Prosciutto at the newly opened Camerata wine bar in Houston. FINALLY someone who can slice prosciutto correctly!

“It’s hard to complain these days,” wrote Austin wine collector and restaurateur Steven Dilley the other day in an email.

It seems like yesterday that many of us would moan and gripe about the wines we couldn’t get here in Texas.

But today, it’s as if a new sun has risen over the Lone Star State.

Master Sommelier candidate David Keck’s Camerata in Houston is my new favorite wine destination in the state. It’s a true wine salon where all the local wine hip folks are hanging out (it’s the place where I saw not just one but two copies of Wine Grapes being passed around).

And by day, it’s home to the newly formed Houston Sommelier Association (I wrote about the new group for the Houston Press here). 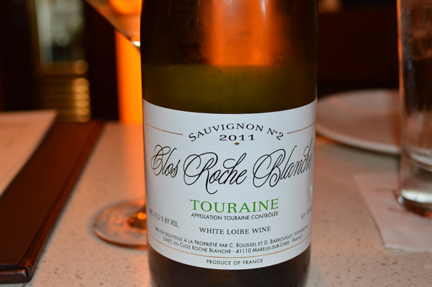 Above: Clos Roche Blanche by the glass on our friend Mark Sayre’s list at Trio at the Four Seasons in Austin. Hell yeah!

Back here in Austin, Tracie P and I had our first night out since the arrival of Lila Jane (now four weeks old; thanks again nanna and pawpaw!).

After we enjoyed a glass of Clos Roche Blanche at the Four Seasons (a wine that Alice turned me on to many years ago now, enabling my interest in and passion for Natural wine), we headed over to the newly opened Arro, where not just one but two Master Sommeliers — Craig Collins and Devon Broglie — write the list and work the floor.

I knew roughly half of the lots on the all French list but would have gladly tasted/opened anything: when you see such intelligence in a wine list, your trust level makes it easy to be led blindly. And that’s what we did. 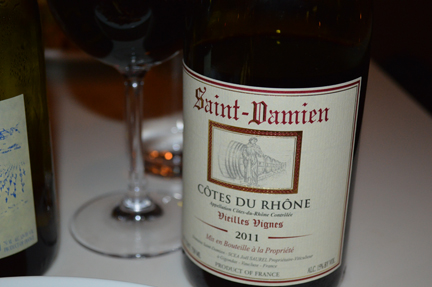 The wine I’m still thinking about this morning was the Saint Damien Côtes du Rhône. But Craig, who was working the floor last night, tasted us on so many great things.

There’s never been such a focused and brilliant list in Austin. It’s a list that makes a statement.

And along with Steven Dilley’s list at Bufalina (which we also loved), Craig and Devon’s program stands apart for its ability to thrill the finely tuned connoisseur and neophyte enthusiast alike.

Isn’t that what a wine list should do? Shouldn’t it forge a level of trust that it takes you outside of your comfort zone? That’s what it did for us and I just couldn’t resist a second glass of the Grenache.

When I moved here nearly five years ago to be with Tracie P, it seemed next to impossible to find a wine list that we could really dig into like the lists we’re seeing today.

Nearly every fine dining restaurant was dominated by “Napa Cab” (I still shudder every time someone says “Cab”) and Chardonnay, with the occasional Malbec thrown in the mix.

Mark Sayre at Trio at the Four Seasons in Austin still jokes about how I called him and “interviewed” him about his wine list when I was looking for a special place to take Tracie P for a romantic evening. At the time, Mark’s list and the list at Vino Vino (today, my client) were the only places Tracie P and I would drink wine in Austin. (Mark, a Master Sommelier candidate, is also writing the list at the excellent and überhip Lenoir, which we love as well, btw).

Today, there is just so much more groovy wine available to restaurant buyers and the new wave of Master Sommelier and Society of Wine Educators candidates has upped the performance level considerably (Scott Ota, also of Arro, recently won the “best sommelier in Texas” title at Texsom, the annual Texas sommelier conference).

None of this was even on the horizon when I first got here.

As Devon wrote to me the other day in a tweet, “we’ve come a long way, baby!”

David, Devon, Craig, Mark, Scott, Steven… We’re with you all the way…

2 thoughts on “The new Texas wine scene is exploding. In fact, there is life beyond “Napa Cab.””