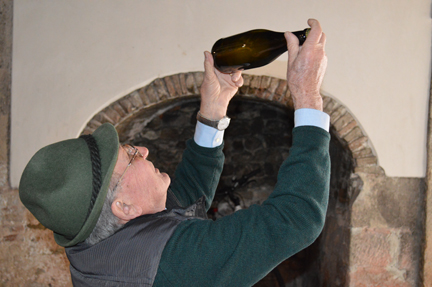 Looking back on my April 2013 visit to Prosecco legacy winemaker Luigi Gregoletto (above), I realized that I’m going to need to devote a series of posts to our fascinating conversation about pre-autoclave Prosecco, Prosecco Colfòndo, and his recent embrace of biodynamic farming practices.

In the film, he and I make a Dantean ascent to the villa where his parents — Proseccoland sharecroppers — were born.

Luigi was born a sharecropper in 1927, five years after Mussolini’s March on Rome.

As he explains in the video, he began to purchase land from the owners about twenty-five years ago.

Today, the hilltop that overlooks the owner’s villa is planted to his prized Verdiso, from which he makes his top wine. It’s a powerful metaphor for the arc of his life.

As we began our climb up the hill that leads to the villa, I was struck by how his family’s story is an Italian parable that spans Italy’s industrialization in the twentieth century to the rise of the proletariat in the years that followed the Second World War.

Sharecropping — a form of indentured servitude — was not officially abolished in Italy until the 1960s. Its prohibition was not implemented until the 1970s. And only in the 1980s did the Italian legislature set out parameters for the redistribution of land.

His truly inspirational story reveals so much about the evolution of Prosecco and the renaissance of Italian wine. And it tells us even more about Italy’s twentieth-century history.

I have a lot more to share about our visit, but in the meantime please have a look at the video. I hope you find the experience as moving as I did.

5 thoughts on “From sharecropper to landowner, an Italian parable”