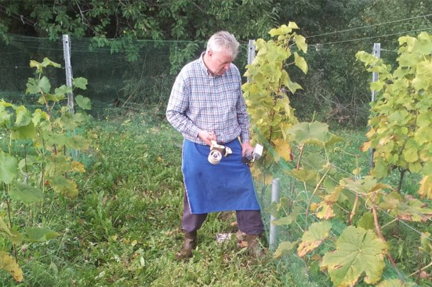 Above: Werner Morandell netting his vineyards in the Mendel Pass (image via his Facebook).

As Giovanni notes today on his excellent blog Terra Uomo Cielo, this is the time of year when grape growers treat their vineyards with sulfur and copper to reduce the risk of fungal diseases, chiefly oidium and perenospora.

At the sound of the tractors’ motors revving up on their way to the vineyard, he is reminded that “not only do the products used to safeguard the fruit pollute. So does the movement of the tractors” belching out diesel aromas more offensive to Giovanni, he writes, than the smell of the sulfur.

There is at least one grape grower in Italy who believes he has found a chemical-free solution to fungal disease: Werner Monrandell (above), winemaker in German-speaking South Tyrol, where his “super-organic” vineyards have no need of sulfur or copper treatments thanks to disease-resistant hybrids he has been developing since 1993, Solaris and Bronner.

The latter is named after the researcher who developed it. The former, evidently, after the 1961 novel and 1972 film.

According to a post by Corriere della Sera wine writer Luciano Ferraro, published on Saturday, the dried-grape Bronner is already available for sale in Italy and the Solaris, while not commercially available, has been offered to Italian sommeliers and viticultural research institutes where it is being studied.

Morandell is one of roughly fifteen grape growers, mostly from Trentino-Alto Adige but also Piedmont and Veneto, who are working together on this project.

“Every year in Europe,” say Morandell in an interview with Luciano, “72,000 tonnes of poison (pesticides, fungicides, insecticides, herbicides, etc.) are scattered on the fruit crop. Roughly 70% of those are employed in viticulture and they leave a residue on the grapes. It’s time to stop this [practice] because it’s possible to make fabulous wines even without chemical treatments to combat oidium and peronospora.”

Some winemakers remain skeptical, like Giovanni, who recently became a grape grower himself.

“I wonder if Solaris will have the same results if it’s planted elsewhere,” he writes.