From the department of “who said that Texas was flyover country?”… 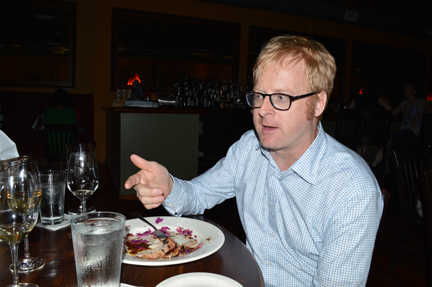 In the course of twenty-four hours on the ground in Texas, I ate lunch with my buddy Ray (as in Isle, executive wine editor for Food & Wine), tasted with a Master Sommelier and one of my favorite Valpolicella producers, photographed the owner of Tenuta Sette Ponti for a client, and had dinner with one of the Italian wine importers I admire most, David Weitzenhoffer (above), owner of A.I. Selections, “the little Italian wine importer who could” (more on that later).

When I first moved to Texas, my friends in New York and California used to ask me alarmedly, what will you drink there? I even heard a few call it “flyover country.”

Nearly five years later, I’m happy to report that I’ve been drinking well, in part thanks to David’s superb portfolio which is now available in Texas (I’ll post my notes from the excellent tasting David organized for me as soon as I can catch my breath).

Today, I head back to New York for one last and thankfully short trip before Baby P 2013 arrives in July.

I’ll be pouring wine at some fancy tastings and I’ll be attending a few incredible tastings myself while in the city. In the meantime, I’m missing Franco Bernabei and my friend Anthony Giglio who are both visiting Texas this week (did someone say flyover?).

3 thoughts on “The little Italian wine importer who could”