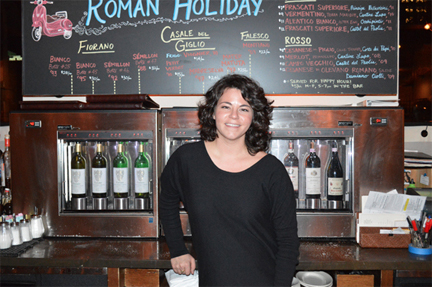 It’s no wonder that Eric the Red includes Maialino wine director Liz Nicholson (above) in the Times tasting panels devoted to Italian wine: she’s got one of the most ambitious Italian wine lists this country has seen in more than a decade. (The other Italophile wine professional he always includes is the inimitable Levi Dalton; check out his great post today in Eater on the evolution of the contemporary wine list.)

My last day in New York (earlier this month), I visited the bar at Maialino on Gramercy Park because I wanted to check out her new Fiorano (whites) tasting flight, reaching back to the 1988 vintage of the prince Buoncompagni’s Sémillon and costing only $50 for a half pour of four of the wines (check out Eric the Red’s post on the wines from way back in 2004).

Liz got the last allocation of these storied wines, which captured the imagination of the New York wine scene in the mid-2000s.

Oxidative, orange, and in some cases tending toward brown, these wines are not for everyone (and I had to ask the bartender to replace one of the younger wines because it had turned to Marsala).

I’m also not convinced that the Enomatic cruvinet is the best vessel to store these old, delicate wines.

But I love that Liz is sharing their last gasp with people like me, who have followed the wine with great interest since they first landed in NYC nearly ten years ago.

Her wine list has a great selection of Langa Nebbiolo and a good balance between traditional and modern styles.

But she also has a fantastic Franciacorta list, my favorite Lambrusco (Rinaldini), and all kinds of cool stuff (Dessimus by the glass, sparkling Valtellina by the glass, etc.).

It’s the kind of list that I love to just leaf through as I sip the 1992 Sémillon (which, in my tasting, showed best in the flight of the Fiorano).

Chapeau bas, Liz! I’m so looking forward to following your career and your lists to come!