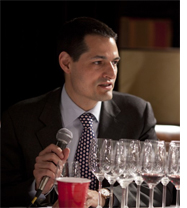 Antonio Galloni (left; image via Corriere.it) has been on my mind the last few days.

In part because I turn to his writing repeatedly for his observations on vintage characteristics and site typicity. In part because his extreme and truly supreme knowledge of Italian wine inspire me. In part because the genuine and unmitigated exhilaration of his Twitter feed reminds me every day why I love what he does and what I do for a living. And in part because the Citizen Kane of wine blogging took a very cheap — and despicably hypocritical — shot at Antonio this week.

Unmentionable wine blogger — who will remain nameless here lest we drive more traffic to his petty hissing — accused Antonio of conflict of interest in an upcoming tasting he’s leading. My feeling is that even if there were a conflict of interest (and there is not), who cares and who could possibly be hurt by a vertical tasting of Solaia (even though I personally don’t care for the brand)?

“There are no more Luigi Veronellis or Giorgio Grais,” he writes (ignoring the fact that there is still a very healthy Giorgio Grai), “no Edoardo Valentinos, and all too soon there will be no more Franco Biondi-Santis. Pioneers like Renato Ratti and Giacomo Bologna are long gone, as are retailers as passionate and devoted as the still-lamented Lou Iacucci – that is now a rare breed indeed.”

I can’t fault Tom for his Jeremiad: as north Americans have discovered fine wine over the last three decades, the wine business has become big business and the larger-than-life, “greatest generation,” selfless figures that he refers to are being replaced by the Zonins, Antinoris, and Lucio Mastroberardinos of this new and brave world.

And that’s why Antonio Galloni matters more than ever.

A Berklee-educated jazz musician, a Milan-trained tenor, a successful finance executive, and — in my view — the leading expert on Italian wine today, Antonio is a true renaissance man for a new chapter in the history of wine connoisseurship. (Few remember, btw, that Voltaire made his fortune in finance before turning to philosophy.)

The culture of wine writing has shifted dramatically in the last ten years and I believe that Antonio’s model of superbly informed writing balanced by his business acumen (expressed through the many high-end consumer tastings that he leads throughout the country every year) represents the new generation of Anglophone vinography.

When House and Garden closed wine writer Jay McInerney’s legendary $75K expense account in 2007, the move represented the end of an era. At the time, there were scores of wine writers making a living purely by writing and not “monetizing” their intellectual property. Today, you can count their number on one hand.

Even our good friend Alice Feiring has begun to monetize her career following the example of Jancis Robinson and Robert Parker, Jr. (and I highly recommend her soon-to-be-published Natural wine newsletter and Kickstarter campaign to you; I’m a subscriber).

15 thoughts on “Why Antonio Galloni matters now more than ever”

@tracieparzen and I really loved this Etna from @terrazzedelletna. Slightly underripe red fruits and ripe berries with hints of cinnamon and other eastern spices. When I called winemaker @_zsa_zsa_zsu_ a few weeks ago to interview her she was working in the vineyards. She’s not an “office” type and it shows in her excellent wines. Really loved this. Thanks again to my client @ethicawines for the care package. Such a great portfolio and I couldn’t be more proud to be consulting and writing for them. Great people. Great company led by my old friend from way back in the day @francesco_ganz. Bravi!