When Italy’s top wine blogger Franco Ziliani wrote me yesterday to share the news that the great Maestro of Sangiovese, Giulio Gambelli (left, photo by A. Pagliantini via Enoclub Siena) had left this world for another, the feeds were already overflowing with tributes for the man who shaped a generation of winemakers in Tuscany and helped to craft some of the world’s greatest wines (see below). As Tuscany continues to abandon the traditional-style Sangiovese (“translucent and profound” to borrow Aldo’s phrase) that he championed, it’s hard not to imagine that his passing will not be remembered as the end of an era…

I’ve translated a few passages below (with links to the orignal posts for Italophones).

A very sad new year for the world of Italian wine: Giulio Gambelli, 87, the great maestro of Sangiovese has died in Poggibonsi, Tuscany. Gambelli was not an enologist but rather a master taster and the world’s greatest expert on Sangiovese — the often challenging, supreme grape of Italy. He was a modest, unassuming person, wine’s humble servant, not an oversized personality but rather an anti-celebrity. To his friends, he was known affectionately as Bicchierino, the little glass.

He was the man who had taught all the producers in Montalcino how to make wine, not to mention a healthy slice of Chianti Classico. He was a (towering) piece of the history of the last 60 years in Tuscan winemaking. But if you told him so, he would start laughing and he would huff and puff, unamused because he didn’t want to carry the weight for something that he did out of pure passion and because he loved to do it.

For those who didn’t know him, the following are just some of the Sangiovese producers for whom he consulted: Montevertine, Poggio di Sotto, Soldera, Ormanni, Villa Rosa, Bibbiano, San Donatino… 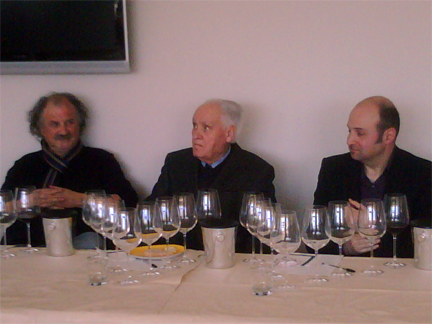 2 thoughts on “The world of Italian wine mourns Giulio Gambelli, the great maestro of Sangiovese”

Congrats @tracieparzen! Well done. I love you. You are amazing.