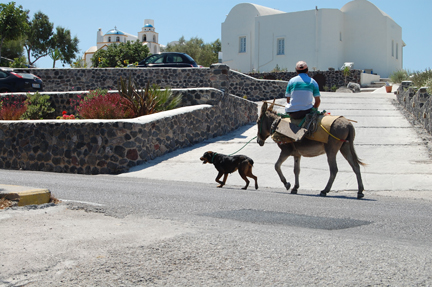 Reading about “Prime Minister George Papandreou’s surprise plan to hold a popular vote on the Greek bailout” this morning in The New York Times, I couldn’t stop thinking about the above photo I took on the island of Santorini this summer.

The next night, I was in Crete and the Greek parliament was about to vote on whether or not to adopt austerity measures imposed by the European Union. At dusk before dinner, you could still see the silhouette of the village where the modern Greek philosopher Kazantzakis was born. 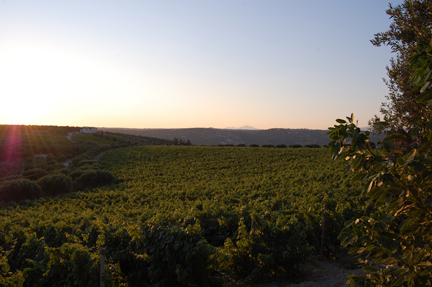 The next day, the Greek parliament voted to adopt the measures. Today, I read in the Times that there’s a strong possibility that austerity won’t be embraced, that Greece will default on its debts, possibly going bankrupt and possibly leaving the Euro zone.

I’ll never forget how the folks I met on Santorini kept telling me the same thing: “It’s as if the Germans were invading us again, with these austerity measures and the bailout,” they said lugubriously.

I remember when dissertation advisor, Luigi Ballerini, told me for the first time (the first of many) how his father, an Italian soldier in the fascist army, was executed by German soldiers on the Greek island of Cephalonia after the liberation of Italy by the Allies in 1943 (Luigi wrote a cycle of poems about Cefalonia, published by Mondadori in 2005).

No matter who’s right or wrong, no matter how this mess will be resolved… has the post-war dream of self-governance and individual liberty come to a bitter end? It won’t be long before the focus of the international community shifts from Greece to Italy…

Where will this leave the farmer in the photo above? And how will explain all of this to Baby P when she arrives in December?

Someday, we’ll take her to Santorini…

2 thoughts on “Austerity on Santorini”