From the “una faccia una razza (one face one race)” department… 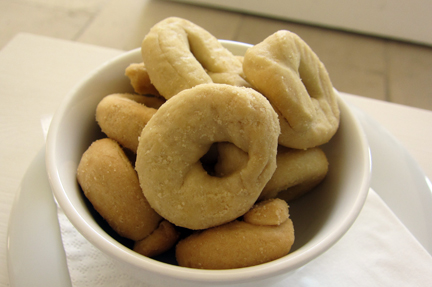 Above: Generic however delicious taralli served to us in Apulia at the Radici Wines tasting.

It all started back in June when Jancis tweeted: “Best inter-wine nibble ever: taralli from Puglia.” For three days, we had been sitting next to each other tasting and scoring Southern Italian wines at the Radici Wines festival in Apulia.

It was our last day of tasting together and one of our Italian counterparts (I can’t find the tweet) quipped back, tweeting “Finiamo a tarallucci e vino,” literally, “we finish [the tasting] with [small] taralli and wine.”

The irony in this context is owed to the proverbial meaning of the expression in Italian. To end with tarallucci [an affectionate diminutive of taralli] and wine means to resolve a dispute by pretending there were no dispute to begin with. In other words, we argued, we disagreed, but let’s have some savory biscuits and wine and pretend that there is no acrimony between us.

While the saying can be applied to express the sentiment that all’s well that end’s well, it can also be used ironically to denote that I believe you’re wrong but there’s no use fighting about it. (The sentiment and expression are by no means unfamiliar to Italians or those who frequent Italy and Italians; it’s often used in Italian journalistic parlance to allude to the hypocrisy of Italian politicians.)

Above: Taralli probably share a kinship with Greek koulouri (I believe the unleavened biscuits in the photo, tasted at Boutari’s Santorini tasting room, fall in the category of koulouri in the Hellenic culinary canon).

Not much is known about the origins of the term tarallo. The Cortelazzo (Zanichelli) etymological dictionary notes that the etymology is obscure, possibly from the Latin torrere, to dry up, parch, roast, bake, scorch, burn. Some point to the Greek δάρατος (dàratos), a type of Thessalian bread.

I have yet to find any reliable source that addresses the origins of the expression tarallucci e vino but the tarallo’s significance as a gesture of hospitality clearly emerges in 19th century literature. It was one of the earliest street foods of pre- and post-Risorgimento Southern Italy (Pitré, Biblioteca delle tradizioni popolari siciliane, 1883) and was presented by and to travelers when they arrived. In The Bagel: the surprising history of a modest bread (Yale 2008), Maria Balińska suggests that the tarallo may be the predecessor of the bagel.

Above: Jancis and the rest of our group paired sweet taralli and spicy Sicilian chocolate with aged Primitivo at the Pichierri winery in Sava (Taranto, Apulia).

Browsing the Henry George Liddell, Robert Scott, A Greek-English Lexicon, I read that the Greek δάρατος (dàratos) was a type of unleavened bread “offered at marriage and registration ceremonies” in Hellenic Greece. And I cannot help but wonder if the tarallo’s circular, adjoined shape does not belie its use as a symbol of friendship (Balińska addresses the Italian ciambella, a similarly round unleavened bread, its relation to the bagel, and the ancient custom of presenting it to one’s host). There’s no doubt that the tarallo travels well and is easy to preserve (in Campania taralli are made with shortening and are often adorned with almonds; in Apulia, they are made with olive oil and adorned with fennel seeds).

If anyone has any insights to share, I’d greatly appreciate them. As a devout philologist, I will not rest until I get to the bottom of this conundrum and we will genuinely be able to conclude a tarallucci e vino.

7 thoughts on “Tarallucci e Vino (biscuits and wine), an attempt at documenting the proverb”