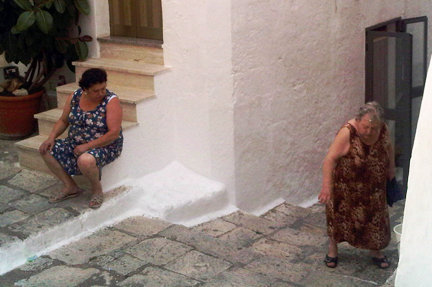 One of the things I couldn’t stop thinking about on this last trip to Italy (where I stayed at a 5-star resort, ate in a Michelin-starred restaurant, and tasted verticals of some of Southern Italy’s most famous wines) was Marx’s concept of alienation (estrangement), Gramsci’s concept of reification (objectification), and Pasolini’s “fear of naturalism” (“the natural being”) and the insight that they provide us in viewing the current global epicureanism as an expression of the bourgeoisie’s (and I count myself and you, my readers, as members of this privileged class) deep-seated yet unanswered yearning to cast off the yoke of consumerism.

Even though we know that sunlight is bad for us, we all know that wonderful feeling of feeling the sun on our skin, watching a sunset, or walking through a park on a bright summer day.

And even though we know it’s not bad for us, a view of verdant pastures or ancient olive groves somehow soothes us. The same way we enjoy reading Virgil’s Bucolics, viewing an 18th-century painting of a pastoral scene, or reading about “hardcore” natural winemaking in Spain on a favorite wine blog, food and wine writing allows us to escape the workaday din of the consumer-driven, globalized, and frighteningly reified world in which we live.

Sadly, in the post-second-world-war industrialized and globalized world, our bodies have become mere objects and the nutriments which give us life have become mere objects and we have lost touch with the pre-industrial expressions of the one and the other. Even as we consume “heirloom” food and wine products, as good and as healthy and as wholesome as they may taste, we cannot ignore (however much we would like to) the fact that the chain of supply that has delivered them to our dinner tables has rendered them into mere objects for consumption (it has reified them) by polluting the world with its carbon foot print as it couriers otherwise nutritious sustenance to consumers.

Marx would have called this “estrangement” (or “alienation” is some circles of Marxist parlance). There are very few among us who have any direct contact with the origins of the foods with which we nourish ourselves. As for Marx’s worker, food as become a mere object for us, even though it is the very substance that gives us life:

From his jail cell, as he witnessed Mussolini and the fascists industrialize Italy (“the trains ran on time,” etc.) and promote an exodus from the countryside and a migration to the great urban centers (because they needed humanpower to populate the factories), Gramsci distilled Marx’s estrangement into his notion of the cultural hegemony, whereby the capitalist cultural model drives humanity to negate its humanness.

Pasolini took this notion a step further, I believe, when he wrote of the bourgeoisie’s “fear of naturalism” and the “natural being.” As he witnessed Italy’s youth embrace the materialism and aesthetic models of middle-class America (in part thanks to the Marshall Plan and in part thanks to the emergence — for the first time — of globalized media), abandoning the values of the generation who had come before them, he recognized that this was a result of consumerism’s revulsion toward the natural being and the natural world (this theme pervades Pasolini’s work, from his early Friulian poetry to his last films; Pasolini was born in 1922, the year Mussolini marched on Rome and rose to power, and he was assassinated by a Roman prostitute in 1975, at the peak of the Christian Democrats’ hold on power and the hegemony of its capitalist model, both economic and ethical).

Now, more than ever, I am convinced that food and wine writing represents can represent, however powerless, a subversion of the hegemony of consumerism in the world today. Whether we take joy in reading or writing about a farmer who casts off chemicals to grow grapes and shuns industrial yeast to make wines that “taste of place,” we are subconsciously repelling the yoke of consumerism as we attempt, however unaware, to recoup, recuperate, and recover the humanness that has been negated by the human condition in the industrialized and globalized world.

Food and wine and food and wine writing offer us a historically unique confluence of the objectification of the sensuous natural world and the means for living. Unlike the natural substances transformed by Marx’s worker as she/he worked in a pre-world-war factory (like iron used to build arms, for example), food and wine as Marxist objects in today’s world are at once the transformed object and a source of nourishment. As such, it gives us a historically unique opportunity to express our humanity through its exegesis (and in many cases, its worship and fetishization).

The girls played for the mayor’s tree lighting festival yesterday evening. Thank you @mrkmully for the amazing photos. Thank you to our school for the wonderful musical opportunities you give our kids. #blessed