Above, from right: three generations of Ginny, Ginny Kalmbach, her granddaughter, and her daughter. All three manage this national treasure.

On Friday night, Austin music icon Dale Watson emceed “Ginny Appreciation Night” at the Little Long Horn Saloon in Austin, Texas (on Burnet Road, on the north side of town, not far from where Tracie P and me live).

Above: I’ve been to many great honky-tonks across our fine nation but Ginny’s — let me tell you, people — is something special (and I say this in a town famous for its honky tonks).

We were at Canyon Lake (in the Texas Hill Country) with family on Friday night but we took friends Brenna and Jason, who were in town from Orange, Texas there last night: no night on the town in Austin would be complete without a stop at Ginny’s.

Above: Ginny showed us her new Lone Star hat, which she had made especially for her.

Ginnny’s real fond of Tracie P (can you blame her?) and every time we visit, she and her daughters ask to see her wedding ring. There’s a sign up at Ginny’s that reads: “No Cussin’, No Fussin’, No Hasslin’, No Wrasslin’!”

Above: Last night, JWW and the Prospectors were playing. You really can’t go wrong at Ginny’s. I’ve been blown away by the caliber of musicianship we’ve seen there.

Folks like Ginny rarely win Kennedy Center Honors or Congressional Medals but, man, she and her saloon are true national treasures, if only for the traditions and music that she fosters and if not for the immense joy that she brings into so many folks’s lives with her bright spirit and motherly affections. 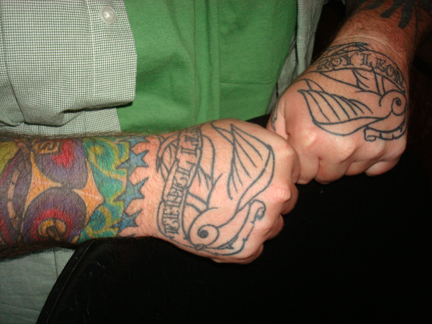 Above: You’d expect Jason to get your back in a bar fight but you wouldn’t expect him to turn to his lovely wife Brenna and say, “damn, it honey! I forgot to cook that beautiful asparagus we have in the fridge.” Jason is an amazing cook and writes a food blog via Facebook. He and I also share an obsession and fascination with Doug Sahm. But more on that later.

Ginny’s was one of the first places Tracie P took me when I started coming out to Austin to visit her. Whether it’s with friends visiting from out-of-town on a Saturday night or just getting our honky tonk on on a Tuesday, we try to get there as often as we can.

Above: If you ever meet a woman who loves country music and knows how to play Chicken Shit Bingo and speaks Italian and cooks a mean ragù, thank your LUCKY STARS!

Ginny, we can’t imagine a world without you.

5 thoughts on “Ginny appreciation week at the Little Longhorn Saloon: No Cussin’, No Fussin’, No Hasslin’, No Wrasslin’!”