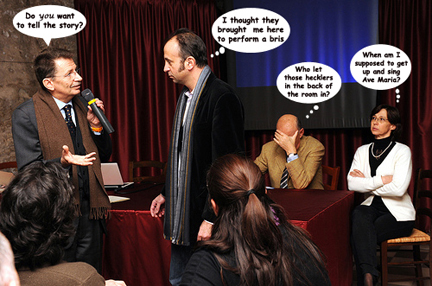 Above, from left: Professor Vincenzo Gerbi (enologist, U. of Turin), me, winemaker Michele Chiarlo, and unidentified woman, March 9, 2010, Tuesday morning in Canelli. Alfonso provided a caption and thought bubbles for the photograph, which he lifted from the Barbera Meeting Flickr feed. Alfonso’s captions are humorous, of course, but the tension was as thick as Australian Shiraz with added tannin extract. It’s never an easy to task to interpret in those situations. I was using a technique called chuchotage or whispered translation, where I would whisper translations of the questions into Professor Gerbi’s ear. Then I used consecutive translation to translate his answers. Ne nuntium necare!

The events of Tuesday, March 9, 2010, at the Barbera conference in Canelli and the heated debate that ensued have been the subject of much discussion. Perhaps the best account of the ideological arm wresting was rendered by fellow member of the Barbera 7 Cory here. (Leading Italian wine writer Franco Ziliani had high praise for Cory’s observations. And fellow Barbera 7 member Fredric chronicled the excellent luncheon here.)

Here’s what Cory had to say:

The first event was a presentation on new research being done on pruning by a group funded by some of the bigger names that produce barbera. For those of you don’t know much about the farming of wine (i’m no expert myself) the way vines are pruned are central to the way grapes ripen, how much they produce, and how the wine comes out. Traditionally barbera has been pruned using the guyot system, (which i won’t get into in detail here). The research being done is on the spur cordon system. It’s one of those things that sounds innocuous to the outsider, but the effects on the wine were profound.

We were told about the effects of the pruning on the acids, the tannins, the color of the wine.

It was around this point that things began to become heated.
Questions were asked as to why this was necessary. Do you really need to keep messing with the grape? Why would you need to control the acid in barbera?

The answer we got was that they were making barbera… important.

Above: During the morning and afternoon sessions, my good friend and blogger colleague Charles Scicolone challenged the winemakers directly, asking “Why don’t you make the same great, food-friendly wines you made 20 years ago?”

After all, the thing that Tracie P and I love the most about real Italian wine is its food-friendliness. Whether old, regal Nebbiolo or young, bright Barbera, we look for three basic elements in the wines we like, the same three elements that make wine friendly to food: high acidity, low alcohol, and honest fruit aromas and flavors. At our house, we never serve food without wine and never serve wine without food (well, to be honest, we only rarely serve Champagne at breakfast!). Joking and clichés aside, our approach to wine can be distilled in the following chiastic aphorism (do you like that one, Thor?): never wine without food, never food without wine.

In other food-friendly news…

Tracie P and I FINALLY got to spend a quiet night at home alone last night. She treated me to Salisbury steak and mashed potatoes… 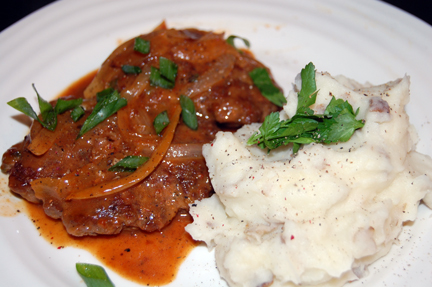 Did I mention that besides being jaw-droppingly gorgeous, the girl CAN COOK? ;-)

Yesterday, I had the great pleasure of doing an online interview with Grappolo Rosso. I particularly enjoyed his request that I pair wines with songs. I really liked, if I do say so myself, my pairing for Australian Shiraz: a little Judas Priest, anyone? Thanks again, Jury! And complimenti per il tuo nuovo blog!