One of the owners of Terroir Natural Wine Merchant and Bar in San Francisco, Guilhaume Gerard, recently reminded me that that the wines come first, before the people who import them. Guilhaume pointed out rightly that while there are a lot of people in the wine trade whom we admire and care about and others whose scruples give us pause, the wines are what is really important. I agree with him. 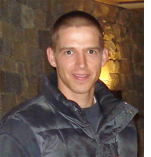 Today, after Franco and I posted on VinoWire about the tragic and senseless passing of the young Miha Gravner (left, photo by Alfonso), I was blown away by how many people linked back to our post, on Facebook and on their blogs, writing about how they never met the young man but how, nonetheless, they felt a personal connection to him and his family through their wines. As Franco wrote in his post at Vino al Vino, Miha had begun working closely with his father Josko and would have continued his father’s legacy.

Josko Gravner was part of a small group of radical “extreme” winemakers, who, as Eric wrote today in an unrelated post, vinified and aged their wine in clay amphorae. I’ve tasted Gravner’s wines on many different occasions, from many different vintages, and no one can deny that these are benchmark, original wines, wines that push the envelope of contemporary winemaking by reaching back to the secrets of the ancients. Josko is also one of the fathers of the natural wine movement in Italy and was inspired by the teachings of Rudolf Steiner.

Cory at Saignée put it best when he wrote:

If you’ve never had one of Josko’s wine, now is the perfect time to grab a bottle and raise a glass to him. They are some of the most individualistic, interesting, and unforgettable wines in the world from a man who has dedicated his life to exploring the possibilities of what wine can be. i, of course, have never met the man and am only familiar with his wines, but i’d like to think that personality can come across in wine making and that you can know someone just a little through their wines, and i wish him the best through this tragedy.

I imagine that Cory, Guilhaume, and I will open a bottle of Gravner at Terroir on Thursday night before I head over to do our set with Nous Non Plus at Rickshaw Stop.

Stop by if you have the time and we’ll remember a young man who would have made the wines we would have drunk for a lifetime.

4 thoughts on “Human, all too human: remembering Josko Gravner’s son”