A few days ago, I was inspired to translate a few passages from Luigi Veronelli’s Catalogo dei vini d’Italia after I read a piece by Eric Asimov in The New York Times about misconceptions in the world of wine. His observation that “oaky is bad but oak is good” made me reflect on my immovable opposition to barrique (i.e., the aging of wine in small, new oak barrels). As Eric pointed out rightly in his post yesterday, the introduction of barrique in Italy was one element in the modernization of Italy’s wine industry and it needs to be viewed in the historical context of the evolution of Italian winemaking.

Eric also had kind — too generous, really — words about my blog. Check out his post to see what he said.

Toward the end of his post, he mentions one of his (and one of my) favorite traditionalist winemakers, Il Poggione, a producer of Rosso di Montalcino and Brunello di Montalcino in Sant’Angelo in Colle, in the province of Montalcino (they also make excellent olive oil). 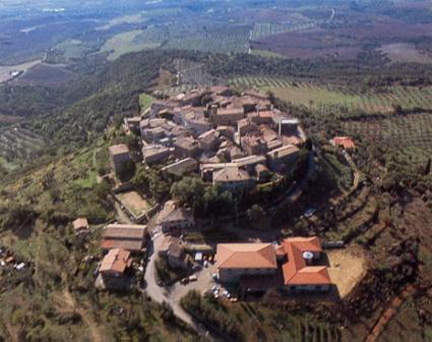 Above: Sant’Angelo in Colle as seen from above (in colle means literally “on the hill”). Il Poggione and its vineyards lie at the highest point of the appellation in and around the town.

I’ve tasted Il Poggione’s wines going back to the 1970s and one of the best bottles of wine I’ve ever had was a 1978 Rosso di Montalcino (yes, a Rosso) on a freezing night in January with winemaker Fabrizio Bindocci and his son Alessandro. I’ll never forget that dinner. We had taken the bottles from Il Poggione’s cellar and walked across the square to the Trattoria il Pozzo.** It was so cold that Fabrizio put the wines on the mantle of the fireplace to bring the wine to room temperature. We also drank an excellent 1985 Brunello Riserva that night with our bistecca alla fiorentina (the Tuscan porterhouse), always served al sangue (blood rare).

Il Poggione is one of the original three producers of Brunello and was already making wine when Biondi Santi created the appellation in the late nineteenth century.

To this day, winemaker Fabrizio refuses to barrique his Brunello, nor will he pull out his olive groves and replant with vines (he could make the winery’s owner more money if he were to do so). He believes in “promiscuous” farming (where olive groves, fallow fields, and vineyards all lie side-by-side) and allows game to forage on the estate. “That’s part of the terroir,” he once told me, “that’s part of what makes the wine Brunello di Montalcino.”

Like Biondi Santi (the originator of the appellation and undeniably its greatest producer), Il Poggione only uses grapes grown at 400 meters asl and above (note the panorama in the image above). As Franco Biondi Santi has pointed on numerous occasions (Eric did a great piece on this last year in The New York Times), the Brunelllo or Sangiovese Grosso grape (a clone of Sangiovese) needs the altitude and its cooler nights to achieve its aging potential (the grapes are cooled in the evening and thus ripen more slowly).

Thank goodness for winemakers like Fabrizio who continue to make traditional wines while other labels (some of them at the bottom of the hill) produce the barriqued, block-buster wines that the ratings-based publications seem to prefer. As Eric points out rightly, there is a place under the sun for both styles.

*αγορά or agora, in ancient Greece, an open space (usually the public market) that served as a meeting ground.