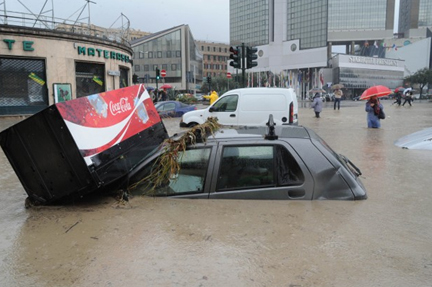 Our hearts and prayers go out to the families of victims of torrential rains in Genoa (Genova) and northwestern Italy: 6 persons died in Genoa on Friday and the city government has declared a day of civic mourning today.

The city is still under a flash flood watch, with more rains expected today and tonight.

Like many residents, writer, poet, humorist, educator, blogger Mitì Vigliero (aka Placida Signora, one of my favorite Italian-language blogs) has left the city for higher ground but she’s posting updates on the weather and emergency resources on her Twitter feed here.

Our thoughts and prayers also go out to the people of Greece, whose economy continues to be paralyzed by its government’s inability to move forward with the European Union debt deal.