The best advice anyone ever gave about blogging was “remember that all blogs are vanity blogs and always write what you feel.” Well, here goes… 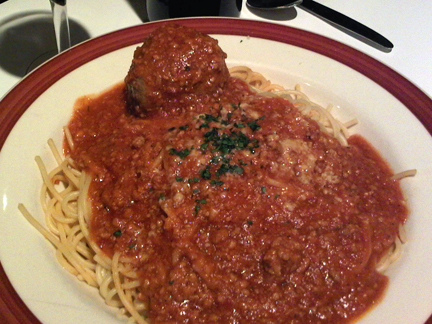 “Everybody had their hands out. Everything was for the taking. And now it’s all over. And that’s the hardest part. Today, everything is different. There’s no action. I have to wait around like everyone else. Can’t even get decent food. Right after I got here, I ordered some spaghetti with marinara sauce and I got egg noodles and ketchup. I’m an average nobody. I get to live the rest of my life like a schnook.”

Last Wednesday’s dinner with my father Zane at Giovanni’s in Munster, Indiana brought to mind the above passage uttered by Henry Hill in Scorsese’s Good Fellas (he had the Veal Piccata, I had the Spaghetti with Meatballs).

Those of you who have followed along here at Do Bianchi haven’t heard much about my father, Zane. In fact, you haven’t heard anything at all. He left the fold of our family when I was a teenager and, truth be told, none of us — my mother and my brothers — have ever entirely recovered from that fissure. The circumstances of that schism began to unfold when I was 11 years old (1978) and in many ways, my Italophilia was borne out of the fact that my closest Italian friends (most of whom were musicians that I met when I was around 19) helped me to see the “transgressions of the father” in a light (Pasolinian?) disparate from that which shines down from Mt. Soledad onto the sun-filled spelunks of the La Jolla Cove where I grew up.

Today, he lives in Highland, Indiana (not far from Munster), a “bedroom” community (as he likes to call it) of Chicago. After leaving our family, he lived in Phoenix, Arizona for many years, and then Israel, where he made the aliyah and continued to work in the defense industry (his second career). About twelve years ago, when he was convinced that he wouldn’t be arrested by the FBI for espionage (as he tells the story), he decided to return to the U.S. for his retirement.

In Italian new wave cinema of the 1960s and early 70s, directors like Antonioni created landscapes that reflected their characters’s stato d’anima (state of soul). The cold temperatures and intonations of grey that greeted me there (above) felt like they came from within me rather than from the environment around me.

Ultimately, Highland, Munster, Hammond, and Gary, Indiana are towns that could have been depicted in Bruce Springsteen’s Darkness on the Edge of Town (have you seen the recent documentary?). The main employers here are the steel mills and Giovanni’s is arguably the best place around. 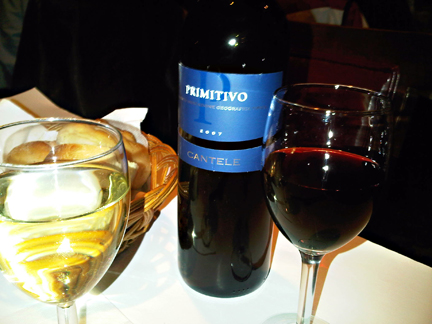 Zane doesn’t care much for red wine but he did share a bottle of Primitivo by Cantele with me. It was one of the two bottles that spoke to me, together with Araldica’s Gavi by the glass (Giovanni’s has an impressive website, with its wine list available online).

A friend once wrote: as “the son of a psychiatrist, Dr. J. is capable of finessing virtually any situation with seamless ease.”

I don’t know if that’s true but like every other human being on this planet, I have one father. It wasn’t and never is an easy trip. It had been too long since I’d gone to visit him… but I’m glad that I did.

As I look back and reflect on my visit and use my blog — my web log, my journal, my diary — as a therapeutical tool, there’s one thing that has come into sharp focus in my psyche: sometimes a meatball is just a meatball.