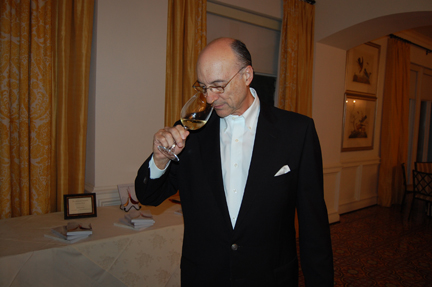 Being a wine writer does have its perks. One of them is the access granted to otherwise out-of-bounds destinations.

Last night found me, a guest of one of the members, at the Westwood Country Club in Austin for a guided tasting and pairing by one of Houston’s wine icons, Denman Moody (above).

The affable and approachable Moody and his lovely wife Marijo were in town to present his recently self-published guide to the wines of the world, The Advanced Oenophile. And I won’t conceal that I was thrilled to get the chance to brush shoulders with them.

In the few minutes I managed to corner him and glean a few nuggets from a lifetime in the rare circles of fine wine collecting, I asked him how he’s seen the American palate evolve since he first began collecting.

“No one in their 30s drank wine” until a few decades ago, he told me.

“All the wine bars that were opened in the 1980s failed,” he said, “because young people didn’t drink wine.”

“If you went to steakhouse, people ordered a Scotch or a martini before dinner and then they sat down and ate their meal and that was it.”

What changed it all? He surprised me with his answer.

“Lambrusco,” he said. “Lambrusco, [Gallo’s] Hearty Burgundy, and Blue Nun,” brands introduced to Americans in the 1970s. “Those were the wines that first introduced Americans to wine drinking.” Later it was the explosion of “Italian restaurants and French restaurants that first gave young people access to wine.”

I remembered an acidified and highly sulfured Frascati that I drank in a chichi restaurant on Cañon Drive in Beverly Hills in the 1980s when I was a freshman at U.C.L.A. in the 1980s. I also remembered my grandfather who always drank a Scotch (just one) before dinner at his favorite steakhouse. Denman was right on…

I haven’t had a chance to dig into his book but leafing through it, I find that it’s teeming with juicy anecdotes from a career of tasting with the wine world’s brightest and best.

Chapeau bas, monsieur Moody, for the new book, for the graciousness with a disheveled wine writer, and for sharing your lifetime in wine with us.

Click here for an excellent profile of Denman by my Houston Press colleague Carla Soriano.