From the department of “I read the news today o boy”… 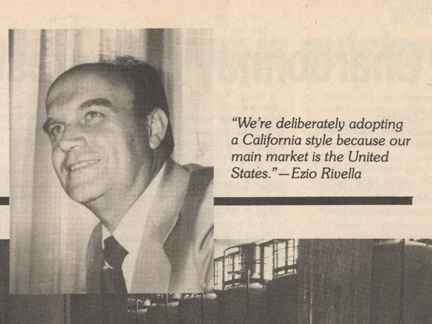 Above: Rivella in a 1982 profile by Wine Spectator.

Not a bad PR move, eh? Announce your long-awaited resignation on a Friday at the beginning of summer.

On Friday, the controversial and much loathed toad of Montalcino, Ezio Rivella, resigned from his position as president of the Brunello producers association. The news was announced by WineNews.it, in its weekly PDF (the fact that it still sends out PDFs is indicative of the great minds behind this pseudo-journal, an advertorial affair produced by a PR machine that serves as Montalcino’s in-house media outlet).

According to the press release — and yes, let’s call it what it is and stop pretending that WineNews.it represents any form of serious, self-respecting editorial coverage — Rivella resigned solely because of personal reasons pertaining to family.

In the end, Rivella did not succeed in gerrymandering changes in Brunello appellation regulations. At every step, he campaigned tirelessly in his quest to allow international grape varieties. And at every turn, even when he called votes at the peak of harvest when he knew the hardship it would cause for producers, the popular voice of Brunello growers managed to drown his.

In reading the news, I couldn’t help but think of Rivella’s Dantean contrapasso: I can see him cast in the fourth circle (greed), forced to drink endless amounts of chemical tannin and tartaric acid.

But in the end, it wasn’t the Commedia that came to mind but rather another cycle of Italian poems written in terza rima, Petrarch’s Trionfi (Triumphs). In it, Petrarch envisions triumphal processions of the forces that inform and ultimately vanquish the human condition: Love, Chastity, Death, Fame, Time, Eternity.

From what I’ve been told by industry insiders, Rivella sought to lay claim to Brunello’s throne (the regal metaphor is his not mine) in an attempt to refashion a legacy that was sullied when Banfi dismissed him (against his wishes) in 1999 after a career that spanned more than three decades. Rivella may have curated Brunello’s meteoric rise in fame but the spoils of the battle were denied him. And in a last flourish, he had hoped to beat time by once again redefining (literally) what Brunello was and could be.

But fame and time were greater forces than he.

Historically (as we have seen in recent weeks here), winemaking in Brunello has always been shaped by big business interests. And it will continue to be so (now more than ever, sadly).

Over the last two decades, those interests have moved farther and farther away from the ideals that informed Brunello’s pioneers (massal selection of a Sangiovese clone, excellent growing sites, and easy railway access). Instead, they have shifted their approach to appeal to globalized tastes and they have over-cropped their farms to deliver the quantities demanded by a globalized market.

We can only hope that Brunello’s new captain will guide its ship back to Tuscan shores and hear the ancient cadence of Tuscany’s great poets.

In other (sadder) news… 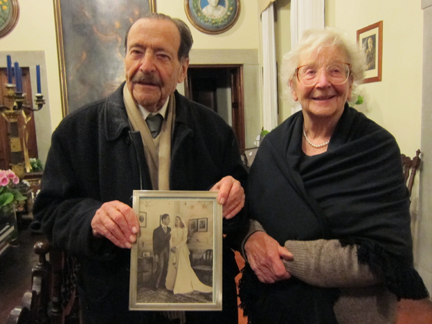 In an uncanny twist of fate, Rivella’s retirement eclipsed the sad news that Count Bonacossi, historic producer of Carmignano (above with his wife Lisa), transpired on May 24, 2012. Bonacossi’s farm produced superb Cabernet Sauvignon long before Tenuta San Guido ever released its Sassicaia. He and his wines were Super Tuscans ante litteram. A press release, issued by the winery, follows…