Above: A still from Fellini’s 1973 Amarcord, screenplay by Tonino Guerra (image via Verdoux).

As if by some seaside romagnolo-infused magical realism, a press release found its way to my inbox this morning. It recounts how one of the greatest screenwriters of all time, Tonino Guerra (below), is to be “fêted” by the Writer’s Guild of America West: “Iconic Italian screenwriter Tonino Guerra has been named the recipient of the WGAW’s 2011 Jean Renoir Award for Screenwriting Achievement, given to an international writer who has advanced the literature of motion pictures and made outstanding contributions to the profession of screenwriter.”

“Tonino Guerra is by any standard one of the great writers of our times. His medium is the screenplay. He has written or co-written more than a hundred films, among them L’avventura, La notte, L’eclisse, Red Desert, Blow-Up, and Zabriskie Point for Antonioni; Amarcord for Fellini; Nostalghia for Tarkovsky; Landscapes in the Mist for Angelopoulos; and Exquisite Corpses for Rosi. Guerra’s work is the brave and moral thread that runs through the fabric of modernist cinema. He is a breathtaking poet, a generous collaborator, and is possessed of the largest heart. We are fortunate to have him among us and thrilled to honor his astonishing — and astonishingly influential — body of work,” said WGAW Board of Directors member Howard A. Rodman. 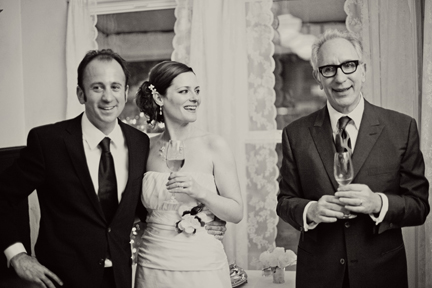 That’s comrade Howard, above, fêting us at our wedding nearly one year ago today! (Just wait to see where we’ll be spending our anniversary, btw.)