Above: Tony Vallone at his landmark Houston restaurant Tony’s in 2013.

Tony Vallone, an Italian-American culinary pioneer and owner of one America’s most renowned restaurants, has died this week. He suffered from “health complications” said his wife, Donna Vallone. He was 75.

Vallone’s landmark restaurant Tony’s in Houston was a place where presidents, sentators, oil executives, and socialites entertained for more than five decades. See this Houston Chronicle obituary where society reporter Amber Elliot lists just a handful of the politicians, business leaders, and celebrities who dined regularly at the restaurant.

Myriad remembrances have been published since news of his passing stunned the Houston food community yesterday. Countless more will surely be posted in coming days.

Few will remember, however, that beyond his role as chef and host to America’s glitterati for more than a half century, Tony was an insatiable gastronome and gourmet, an authority on Italian and American cuisine, and a generous soul who mentored a generation of food and wine professionals. He simply loved to talk about food — especially Italian cookery — with anyone who shared his boundless passion for gastronomy. 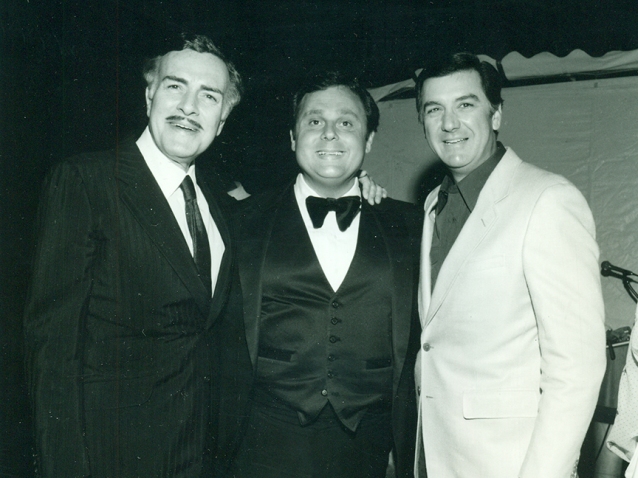 Above: Baron Enrico “Ricky” di Portanova (left), a Houston socialite, with Tony (center) and baseball great Bob Aspromonte in an undated photo (circa 1980).

I worked for nearly eight years as a media consultant for Tony’s restaurant group and spent many mornings with him bantering over the minutia of Italian cuisine and drinking espresso.

In the 1970s, after the legendary Houston developer Gerald Hines had recognized Tony’s immense talent and helped him launch the second Tony’s (the first stood where the Macy’s in Hines’ Galleria shopping mall is now located), Tony began traveling regularly to Italy where he dined and researched Italian regional cuisine.

From the finer points of ragù alla bolognese to the wild fennel fronds needed to make a proper pasta con le sarde (the classic Sicilian spaghetti with fresh sardines), no nuance of Italian gastronomy escaped Tony, a true culinary titan of his times.

His recipe for cannoli was based on his experiences eating the dessert in Piana degli Albanesi in Sicily, a small village in Sicily where he had traveled expressly to uncover the secrets behind the iconic dish. Today, in the (pre-pandemic) world of global travel and Instagram, that may not seem impressive to some. But when you consider that Tony made the trek in the late 1970s, it’s clear that he was an unrivaled culinary pioneer and gastronomic adventurer of the era.

Italian food writer and restaurant critic John Mariani often cited Tony as a leading restaurateur of the “FedEx” generation. Tony famously recollected how he would source his calamari from bait shops in the early days of Tony’s because no fish monger in Houston would carry them. But in the 1980s, when international couriers made it possible to obtain fresh buffalo’s milk mozzarella from Campania and line-caught Mediterranean sea bass, Tony was literally one of the first in America to offer his guests such delicacies. Today, food like that may seem commonplace to WholeFoods devotees. But when Ronald Reagan was president and Houston was enjoying its second wave as one of the world’s must-visit destinations for the well heeled, Tony was an unrivaled trailblazer of fine dining.

His encyclopedic knowledge of Italian and world cuisine was nothing short of spectacular. And his hunger for culinary exploration never waned. I remember his unbridled joy when he finally sourced a rare Italian heirloom legume, a broad bean distinctive for its nearly black coloring. The dish he was working on at the time wouldn’t be complete without it, he said.

When a friend texted me to let me know of his passing yesterday, my mind overflowed with warm memories of Tony, our conversations, and spellbinding meals that Tracie and I shared at his table.

The greatest lesson that he ever taught me about Italian food was as simple as it was profound.

“For Italian food to be truly authentic,” he told me, “it has to be creative.”

That philosophy — that ethos — pervaded all of Tony’s cooking. He’ll be sorely missed. But he and his food will never be forgotten.

One thought on “Tony Vallone, Italian-American culinary pioneer, dies at 75.”