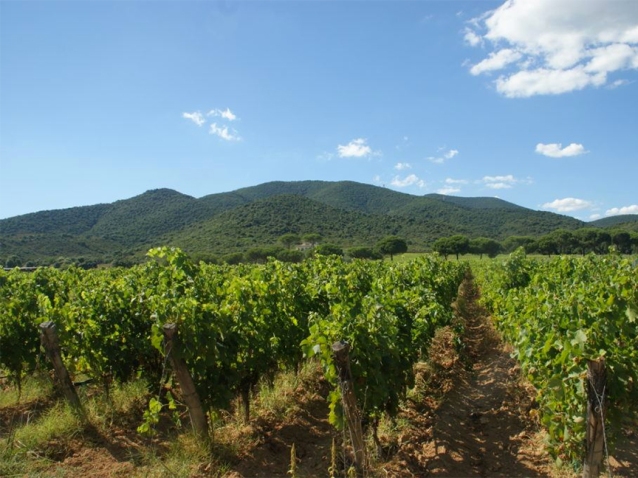 Above: vineyards in Maremma along the Tuscan coast where “Super Tuscans” are produced (image via the Wilson Daniels website).

The more closely you look at a word, wrote the early 20th-century aphorist and poet Karl Kraus, the more distantly it looks back at you.

This couldn’t be more true when it comes to the meaning and origin of the expression “Super Tuscan.”

Historically, the named was used unofficially to denote high-quality Tuscan wines that were classified as vino da tavola (table wine) because they didn’t qualify to be included among the “designations of controlled origin” (DOC). Ostensibly, the reason they didn’t qualify was because they used Bordeaux grape varieties that weren’t recognized by the Italian DOC (appellation) system at the time.

The earliest mention of a Super Tuscan (wine) I’ve been able to find in Google Books is in a 1987 tasting note in America Wine Society News. It references a Sangiovese and Cabernet Sauvignon blend “that cannot be considered a true Chianti.” You can’t read the entire passage on Google but it’s likely that the writer was referring to Tignanello, the famous blend of Sangiovese and Cabernet Sauvignon that Antinori first produced as a “table wine” with the 1975 vintage.

There are, however, antecedents beyond the wine world.

And in 1915, in Howard’s Blue Book: The Only Index-catalogue of the Paint, Oil, and Varnish Industry, there is mention of a “Super Tuscan Red” paint, possibly a reference to the distinctive light red color we call “Sienna Red” today.

Most Italian wine trade observers agree that Tignanello (produced in Chiantigiana) and Sassicaia (produced in Bolgheri on the Tuscan coast) are the earliest examples of wines that were commonly referred to as Super Tuscans. Sassicaia was available in the U.S. in the early 1970s. According to the winery that produces it, San Guido, the 1968 vintage of Sassicaia was the first to ship to the U.S. (thus predating the arrival and advent of Tignanello).

But no one knows for sure who first used or coined the term in the context of wine.

By the late 2000s, it had become fashionable in the alternative U.S. wine media to denigrate the Super Tuscans — the “aia wines,” as some of us called them — as bottlings created specially for the American market. The wines were excessively “oaked,” writers moaned, overly concentrated (“extracted”), and jammy like the “fruit bombs” that Napa-loving Americans preferred.

But cum granus salis, the claim wasn’t entirely true. In 1989 when I visited Montalcino for the first time, sommeliers there were eager to pour Sassicaia and Ornellaia side-by-side with Brunello (another wine that had yet to make its name on this side of the Atlantic). Looking back on it now, there’s no doubt in my mind that these wine professionals were extremely proud of the wines and considered them some of the best expressions of Italian viticulture at the time. And many of the wines, especially from the top tier, were and are still today elegant, restrained, and impeccably balanced. They may be “oaked” but they are not necessarily “oaky.”

Other Tuscan winemakers would try to reproduce the historic Super Tuscans model — some successfully and some not so much. But the legacy of the aforementioned wines was firmly and undeniably established by the late 1990s when Italian wine would begin trending upward in the U.S.

On Thursday night here in Houston, I’ll be co-hosting a guided wine tasting and dinner with a genuine Super Tuscan, Federica Mascheroni Stianti (below, left, with her mother Giovannella Stianti Mascheroni, another Super Tuscan woman) at Roma restaurant (my client). We’ll be tasting her family’s Castello di Volpaia Chianti Classico together with one of their more recent entries, the Prelius Cabernet Sauvignon raised in Grosseto province in Maremma along the Tuscan coast.

Their Cabernet Sauvignon is aged in large cask — not the small French barriques commonly used for the historic Super Tuscan wines. Restrained and lithe on the palate, with classic varietal expression, it’s not “oaky” or “jammy” or “overly extracted.” Is it a Super Tuscan?

I hope you can join us this week to taste it and join in the conversation!

Here’s the menu and reservation details.

4 thoughts on “What is a “Super Tuscan” and where did the term come from? The answer might surprise you.”