According to a report published just minutes ago by the Associated Press, “Italy, a country of 60 million, registered 2,978 deaths Wednesday after another 475 people died. Given that Italy has been averaging more than 350 deaths a day since March 15, it’s likely to overtake China’s 3,249 dead — in a country of 1.4 billion — when Thursday’s figures are released at day’s end.” 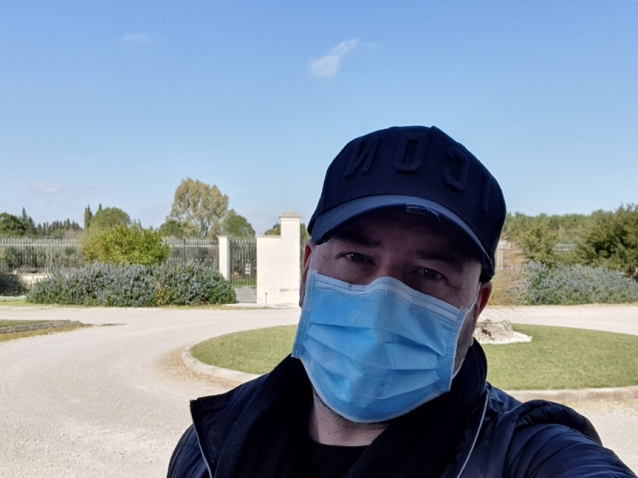 Above: Paolo Cantele, one of my best friends in the world and my client of many years, standing in front of his family’s winery in Guagnano in Lecce province. He calls me “Jar,” my nickname since I was a teenager.

It took me a little time to write you because, to be perfectly honest, I wasn’t in the right mood for it.

Writing is supposed to be therapeutic. It’s meant to help you overcome you’re the fears and doubts that grip your brain even as your mind, despite its efforts to remain cool and collected, continues to focus on that damned list of infected and dead.

Everyone is trying to keep working, regardless of how challenging this all is. We all know full well that for the next 3-4 months, there will be no wine sales. There will be no cash flow. And it’s going to be tough to pay the salaries of all the kids who work for us. They’ve been nothing less than fantastic through all of this.

Angelo Gaja has said that he’s not going to fire anyone. Instead, he’s hiring. Good for him! I’m planning to send him my resumé.

Thankfully, the situation in Puglia and the Salento Peninsula isn’t as bad as northern Italy. But that’s only because we were able to implement preventive measures before the virus spread.

You know how critical I can be of Italy and my fellow Italians. But Italians’ true spirit comes out in difficult times like these. We’ve all become aware, more or less, of the enormous challenges that we face. And the only thing we can is to stay closed up in our homes and persevere. We’re doing so, as diligently and rigorously as we can.

I’m proud to be an Italian. And I’m proud to be part of a community that has refused to throw in the towel. A community that fights and will continue to fight even — and especially — after the virus will be defeated. But it’s damaged pride, sadly spurred by a European Union that has shown itself to be more Disunited than ever before.

We need to take stock of the fact that we are going to have to lift ourselves out of this mess by ourselves, through no one else’s efforts but our own.

But I have faith that we can make it because Italians always give their best in moments of crisis.

I hope I get to see you again soon, man. I miss the U.S. I miss our road trips. And I miss our talks about the wondrous invention otherwise known as life.

2 thoughts on “Letter from Italy: “I’m proud to be an Italian” by Paolo Cantele.”