Above: A protest of the Confederate Memorial of the Wind in Orange, Texas, where the Sons of Confederate Veterans have erected a monument celebrating Confederate battle flags. The conspicuously displayed banners include the “Confederate Flag” that Nikki Haley has praised as a symbol of pride and heritage. The monument stands on the corner of Martin Luther King, Jr. Dr. and Interstate 10 in a city where an ongoing legacy of racial violence has stained the community for generations. See the Sons’ rendering of the site below.

Rising Republican star Nikki Haley’s recent claim that the Confederate flag is not a symbol of white supremacy is as egregious as it is dangerous.

Egregious because — I’m sorry to break it to whitewashed, “snowflake” Republicans — the Confederate flag is a symbol of the white supremacist movement in our country.

Your white friends who belong to the Sons of Confederate Veterans will tell you that it’s symbol of “pride” and “heritage.” And they are right: it’s an expression of their pride in white supremacy and their ancestors’ belief in and support of apartheid in this country — otherwise known as poll tax, Jim Crow, and the “Southern Strategy” of the 20th-century Republican party.

Just have a look at the flier (below) that the Sons of Confederate veterans circulated as they gathered money to erect their “Memorial of the Wind,” a celebration of Confederate battle flags including the Confederate flag, in Orange, Texas where half the population is black and where there is a searing legacy of racial violence and Jim Crow.

Her assertion is dangerous because it’s the latest example of the Republican party’s defense, validation, and propagation of the flag itself.

Just as the leader of her party and her close political ally Trump claimed that there were “some very fine people” carrying tiki torches and chanting “Jews will not replace us” in Charlottesville, Haley contends that the flag is conspicuously displayed by a mere handful of bad actors.

Evidently, she hasn’t visited the South lately. Here in Southeast Texas, the Confederate Memorial of the Wind (depicted in the flier below) stands at the corner of Martin Luther King, Jr. Dr. and Interstate 10. And all you have to do is meander through the residential streets of southeast Texas and you’ll find Confederate flags displayed conspicuously on houses and cars.

In our own neighborhood in Houston, I’ve spotted a Dodge Charger with a Confederate flag painted on it.

But in recent years, I’ve also seen countless Confederate flags displayed in my hometown of San Diego, California. I even saw more than one prominently displayed Confederate flag when I visited Oregon wine country earlier this year.

To embolden white supremacists with morally bankrupt rhetoric like Haley’s is to euphemize a growing and increasingly violent group of hatemongers who embrace the Republicans’ historic and well-documented subjugation of people who don’t look like (or vote for) them.

Don’t believe me? Just ask my friend in Orange, Texas who drives down Martin Luther King, Jr. Dr. every day, traveling beneath the Interstate 10 overpass to take her daughter to elementary school. 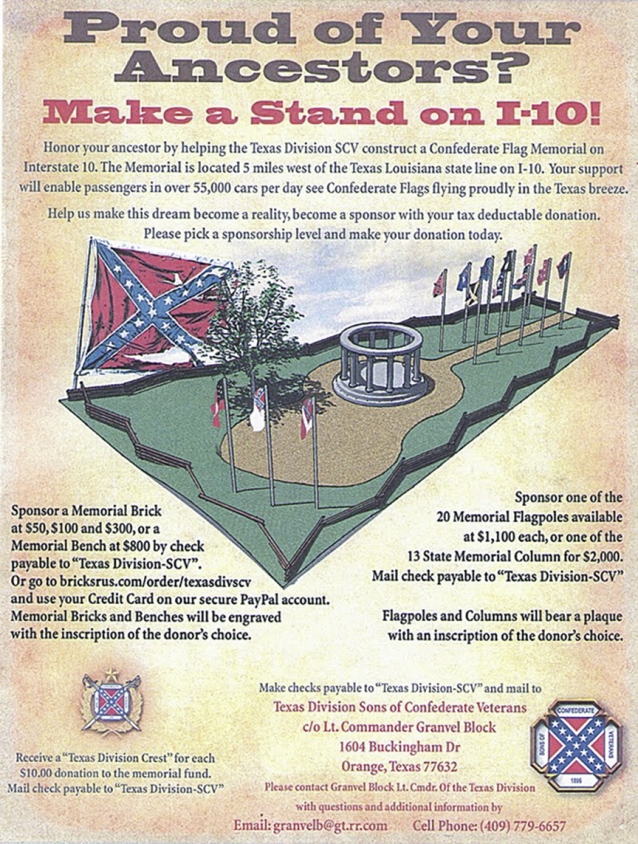 4 thoughts on “The Confederate flag is a symbol of hate. Don’t believe me? Ask your black friends.”