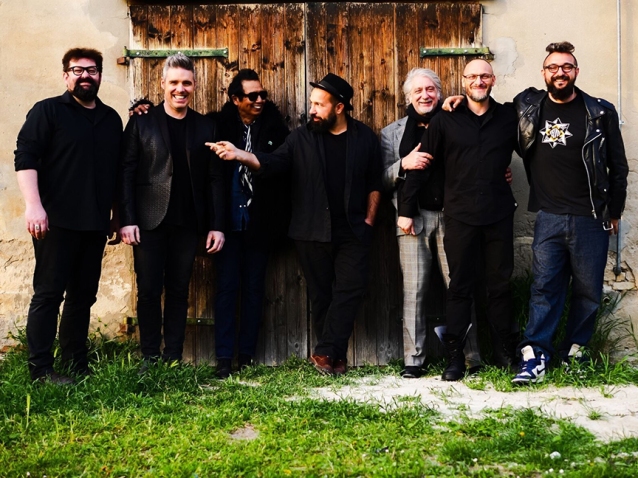 Alejandro Escovedo (above, third from left) is one of America’s most iconic songwriters and performers. His new album, “The Crossing,” was recorded in Emilia-Romagna with a group he met serendipitously while touring in Italy. It tells the story of two young migrants — one from Mexico, the other from Italy — who meet while working in a restaurant in Galveston.

Over the Christmas holiday, I had the opportunity to interview the legendary Texan musician. The following are excerpts from our conversation.

He and his Italian band Don Antonio are playing this Sunday at the Heights Theater in Houston (see this preview on the Houston Press).

When it comes to rock ‘n’ roll, Italians have a different sensibility and a different sense of rhythm than Americans. What clicked for you working with Italian musicians?

I did not expect them to have that groove. I didn’t want them to be an American band. I wanted them to be an Italian band. And it was important that they kept their identity that way — musically. And that’s what impressed me about them.

When they bring in anything that’s slightly American, it’s about the Twist. Because the Twist was a popular form in the 1960s, in Italian movies and soundtracks. It’s not that they don’t love American music. They’re very well versed in blues and soul and R&B and the guitar players from Austin, songwriters from Tucson. Obviously they’re big fans of that stuff. [But] it doesn’t dictate who they are. And that’s what was really attractive to me.

So I did not expect them to sound like the Stooges from Detroit, I didn’t expect them to sound like the Zeros or the MC5. I wanted them to be Italian because the beauty in Italian music is that it’s always searching for melody. It’s got this beautiful, kind of dramatic soulful, very passionate kind of view. And that’s what I wanted from them. It wasn’t a problem for me that they didn’t sound like Muscle Shoals. That’s not what I wanted.

In interviews, you’ve talked a lot about how recording in Italy was a different experience than recording in America — in part because of the food.

The Italian press [like] Buscadero has been very generous with me. And I’ve always had great shows in Italy. I’ve done a lot of tours.

But when I met Antonio and the boys, they picked me up in Bologna at the airport. And they happened to have a friend who was also on the same plane. So they gave her a ride back to Faenza. And then we proceeded to Modigliana, which is their town. Then we immediately went to go eat, which the Italian thing, right? It’s essential.