On Wednesday of last week, my wife Tracie and I stood for two hours on the corner of Interstate 10 and Martin Luther King, Jr. Dr. in Orange, Texas in protest of the Confederate memorial being built there by the Sons of Confederate Veterans Texas Division.

We organized the gathering together with Southeast Texas Progressives, an advocacy and activist group created by its founders so that they and we could have “a place to express our shared ideals and political views without fear of being insulted or mocked.”

Here’s the Facebook group. Feel free to join and/or PM and I’ll invite you to join.

Our four-person protest was covered by both the Beaumont Enterprise and the Orange Leader. (Beaumont, Orange, and Port Arthur form what is known as the Golden Triangle in Southeast Texas.)

To get an incomplete picture of how our activism was received online, I encourage you to read the comment thread on the Enterprise site.

Tracie and I were also trolled by a Houston-area resident Cutter Brewer, owner of CBrewer Investments, LLC. I’m not sure why he deleted his disparaging and hateful comments (although I have my suspicions). He rebuffed my friendship request on Facebook. (Cutter, man, let’s get a drink together sometime soon. The first round is on me. I mean that for real, in all earnestness. You know where to reach me.) 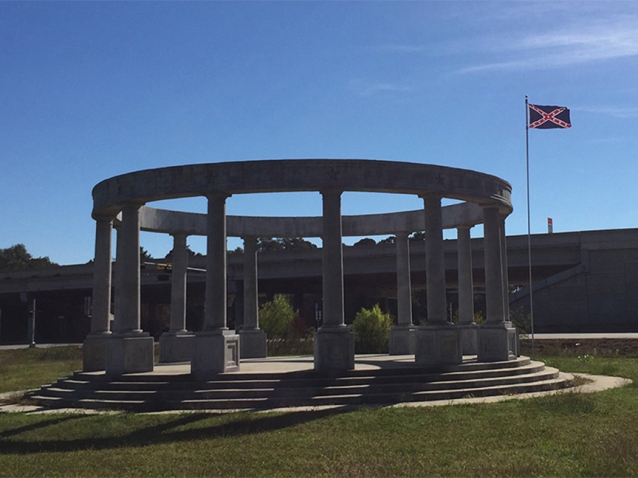 Above: the Memorial of the Wind in a photo taken by me in late November 2016. Anecdotally, it seems that no other flags have been flown at the site since that time. That’s the flag of the Army of the Trans-Mississippi, one of the only flags on record (from what I can find) to have been flown there. Since that time, I’ve visited the site numerous times during family trips to Orange, where Tracie was born and raised and where her parents and much of her extended family still live. Currently, the site is unkempt and seems to have been neglected. I’ve written to numerous members of the Sons of Confederate Veterans Texas Division but haven’t received a response regarding the status and future of the site. You can see current and past images of the site in this photo gallery posted on the Beaumont Enterprise website.

A media colleague of mine, a Beaumont native and a prominent Houston-based writer, reminded me that I shouldn’t be surprised by the negative reactions (some of them unspeakable!).

But I was surprised by how many passersby expressed their support and solidarity that day. Although a handful shook their heads in disapproval, most of the people who drove by waved and gave us the thumbs-up.

Although we were squarely trolled online, no one was rude or hateful in person. And we also received a lot of private messages from Orange residents expressing their solidarity.

In the wake our micro-protest, we have learned that the story behind this monument is much more complicated than what meets the eye. I’m currently in the process of researching information on the genesis of the site and who’s actually behind it. And I plan to get that info out there once I can get my eyes and hands on the documentation that I seeking out.

Tracie and I will be joining a march organized by the NAACP (correction January 9, 2018: Southeast Texas Progressives will be marching in solidarity with the MLK March but is not an organizer of the event).

We will be meeting at Solomon Johnson Park at the corner of 2nd St. and Turrett Ave. at 12:30 p.m. for line-up. March will begin at 1:00 p.m. Following the March, Tracie and I will be taking part in a protest at the Confederate memorial. Please join us!

Here’s my email address if you need more info and/or want to coordinate a ride to Orange for the march and protest.

Thanks for reading and thanks for your solidarity. #LottaContinua

One thought on “Protesting racist iconography in Southeast Texas: a recent effort and upcoming MLK march in Orange (TX)”