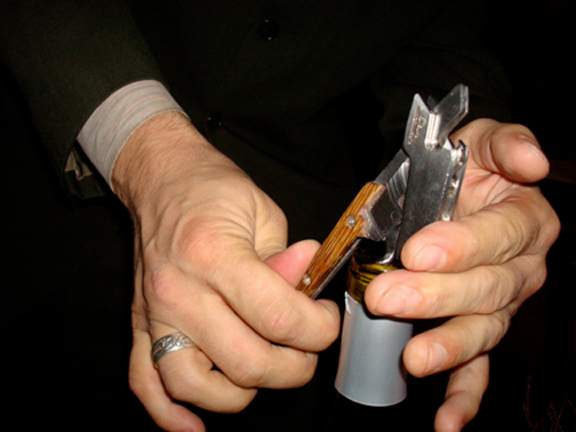 I went to a public university that had a scientific bent. As I was one of its less brainy students, I’ll save the school from embarrassment by leaving it nameless.

This memory surfaced as I thought recently about how wine has changed.

In case you’re not getting the reference, the above is a parody of an article by the illustrious, ivory-tower-educated and senior wine writer Matt Kramer, whose recent op-ed for Wine Spectator, entitled “Not a Trivial Pursuit,” has been the subject of lively discussion among wine professionals on social media this weekend.

In Kramer’s Jeremiad, he bemoans the “credentialization” of the wine trade. O the lamentization of wine writing these days!

“It seems that everyone is seeking to be a ‘master’ of this or that,” he observes. “Does wine, of all subjects need such credentializing?” he asks rhetorically.

The “modern demand for a credential,” he writes, “is larger and more substantive than mere careerism… We now insist on a kind of professionalization that has less that has less to do with the benefits of an education and more to do with jumping through hoops held by others in order to acquire a diploma of some kind.”

“Now, you could say that it was ever thus, and you’d have a fair point,” he concedes. “But our current pursuit of credentials creates an undesirable class differentiation for a subject that neither needs nor deserves one.”

His op-ed wouldn’t bother me if it weren’t for that line about “an undesirable class differentiation.” That’s where his argument falls apart and where he betrays his bête rouge.

In another time, the realm of wine authority belonged to people like him, his peers, and to those who have acquired “an understanding of wine… over a lifetime of bottle slowly savored during a meal. It’s like living with a painting as opposed to gazing at one for 30 seconds in a museum.”

Evidently, you need to have the financial means to “live with a painting” in order to achieve an “understanding of wine.”

The “undesirable class differentiation” that he writes about doesn’t work for him because it runs in the wrong direction, in other words, from the proletariat class moving upward.

On Saturday morning, I found myself sitting next to a Master Sommelier candidate at our neighborhood diner. We were both there with our kids having bagels and eggs and fish.

“Did you see Matt Kramer’s article?” he asked me. “I have all the respect in the world for Wine Spectator but come on!”

My Houston colleague is the wine director of one of the city’s most illustrious wine programs where oil-and-gas set high rollers spend obscene gobs of money on a deep-reaching list of French and Californian wines. The list has won numerous Wine Spectator “Excellence” wards.

“I’m studying for the Master,” he said, “because I’m trying to push myself. I’m trying to make myself a better wine professional.”

Kramer, I’m sorry to break it to you, man: the world is changing more rapidly than you can -izize or -ism the new wave of young people who may not have attended an illustrious college like you and probably don’t have Picassos hanging on their walls.

Reducing them and their studies to an -ization runs counter to the spirit of what wine is at its heart: human nourishment and hospitality.

While you gaze upon your Matisse comfortably nestled in your cozy ivory (read Platonic) cave, a glass of Caymus Special Selection in hand, a new generation of wine professionals and their post-nominals are shepherding a throng of new wine lovers into a brave and thirsty new world of wine appreciation.

Just think: many of these hoi polloi will ultimately become Wine Spectator subscribers. And in my view, even that is a good thing.

Thanks for reading this and please ascribe my bad grammar to my public school education and the fact that my family and I don’t have a Rothko hanging on our wall.