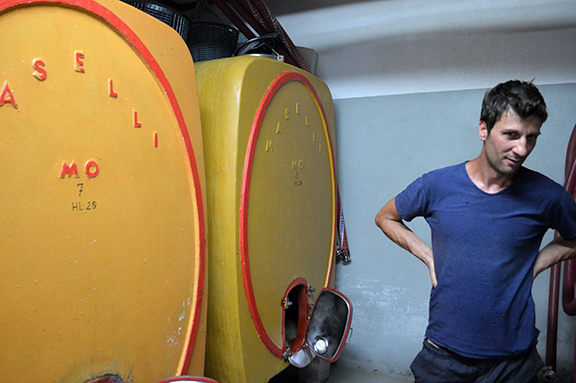 Above: winemaker Gian Paolo Isabella of Podere Il Saliceto in Modena province in June of 2015 when Chef Steve Samson and I visited and tasted with him. His Lambrusco is one of the wines I recommended in an Los Angeles Times piece published this weekend. A super nice guy, he used to be a professional kickboxer. He developed an interest in wine, he told me, touring the world for his sport. I liked the wines a lot.

One of the gifts tucked in my Christmas stocking this year was a Los Angeles Times feature on my good friend Steve Samson, chef and owner of Sotto in Los Angeles where I serve as wine director: “Chef Steve Samson shares a New Year’s Eve tradition: tortellini” by the paper’s restaurant critic and wine writer S. Irene Virbila.

Tortellini is a classic New Year’s dish in Bologna (in the region of Emilia-Romagna) where Steve spent summers as a kid.

The article is paired with my Lambrusco recommendations: “Looking to drink something a bit different this New Year’s? Pour a fizzy Lambrusco.”

Chef Steve is planning to open an Emilia-themed restaurant and Lambrusco garden later this year to be called RossoBlu. I will be authoring the wine list there as well.

He and I visited the region in June of this year for some “research and development” (read: some mighty eating and drinking).

I’ve spent a lot of time in Emilia over the years and I still have a lot of really close friends there. It was such a thrill for me to see the piece in the Times.