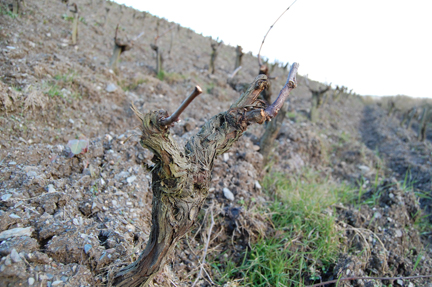 One of the Italian wine bloggers I admire most, Ken Vastola, wrote me this morning asking about the meaning and origins of the Italian expression piè franco.

The designation can be confusing, especially to the non-Italophone among us.

Here’s what he wrote to me:

I have read in my places that Franco in “Pie Franco” means French. Thus implying European root stock. But Keith Levenberg wrote to me “a correction to the pages for the Pie Franco, “Franco” actually doesn’t mean “French” as is usually assumed — it means “free,” so, free feet as distinguished from feet that got cut off and tied up, I guess.”

Can you clarify this for me? I know linguistic and Italian in particular is your specialty. I thought Franco was Piemontese, not Italian.

Piè franco is used in Italian wine parlance to denote ungrafted rootstock and is often employed to designate wines made from ungrafted, pre-phylloxera vines, like the Cappellano Barolo Piè Franco. It is akin, although not derived from, the French franc de pied.

The word franco means free or independent in Italian (not French). Lexicographers point to the Franks, third-century Germanic invaders of the Italic peninsula, as its etymology. They were “free,” unrestricted by Roman law.

By the time of the Renaissance, the term campo franco (free field) denoted an open field where a duel could be held.

By the end of the seventeenth century, the term lingua franca (free language or tongue) denoted a means of communication between speakers who did not share a common language.

Here’s where it gets interesting…

Piè appears for the first time in Italian in the fifteenth century, as a truncated form of piede (foot). One of the earliest instances is found in humanist poet Politian (Poliziano, who was from Montepulciano, btw). The wonderfully maleable Italian language is ideal for poets and prosodists: syllables can seamlessly be elided and vowels can mellifluously be fused in the name of versification (my dissertation was devoted to Italian Renaissance prosody).

The expression piè franco (literally, free footed or free standing) begins to appear in the eighteenth century, the age of the Italian enlightenment (Parini, for example) meaning with unclouded thought. It’s borrowed from religious parlance, where it meant free willed.

Camminare a piè franco meant to walk with a free gait, as in the English expression to go one’s own gait, in other words, to pursue one’s own course (OED). (It’s interesting to note that Manzoni changed piè franco to passo libero or free passage in his 1840 edition of The Betrothed. But that’s a longer conversation!)

By the mid-nineteenth century, agronomists had begun to employ the term to denote free-standing trees. Many note how lower planting density in orchards can produce higher quality fruit. (The Bindoccis wrote about this recently on their blog in regard to olive grooves.)

This makes perfect sense because the evolution of the meaning mirrors the emergence of the phylloxera plague of the 1800s.

So there! Thanks, Ken, for setting me down this path and nudging me to walk with my own gait!

The subtitle of my blog is: “Negotiating the Epistemologic Implications of Oenophilia.”

This little philological romp is just the type of thing that gets me going: using wine as a lens to see and better understand the world around us.

6 thoughts on “Piè franco, origins of the designation (more fascinating than expected @finewinegeek)”

Thank you @alicialini for the wonderful wine! And amazing to see that old bottle at the winery! Dindo’s family loved the new riserva. And Dindo’s mom made green lasagne for the occasion. Fantastic. So blessed to have a friend in you. Abbraccione.