Last year I was lucky to pick up a case of 2006 Romangia Rosso Renosu by Dettori (Sassari, Sardinia), Alessandro Dettori’s declassified Cannonau from the “uneven” 2006 vintage there (as Antonio Galloni has called it).

The U.S. retailer and Alessandro don’t seem to be on the same page as to why the wine was declassified (possibly because of a language issue?).

According to Alessandro, he decided to bottle the wine in 2008 in the middle of a disastrous vintage for him. Normally, he would have let the wine age longer in vat before bottling. But according to one of his ever lyrical emails, the bottling was inspired by a bout of powdery mildew during the devastating summer (for Dettori) of 2008.

Maybe he was concerned the onslaught of bacteria tainted a few of his vats. Or maybe, as he suggested in an email, he remembered how previous generations bottled their wine right away. They did so because they wanted the wine to be ready for the winter and feared being without wine. But by doing so, they also avoided potential spoilage issues.

I’d seen mixed reactions to this wine in the chat rooms. But I also know that Alessandro’s wines require patience — in your cellar and at the table. 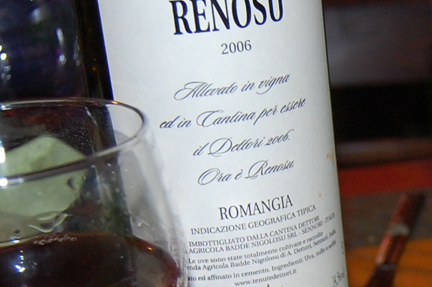 He calls his declassified wines “Renosu,” meaning sandy (from the Latin [h]arena, meaning dry, sterile sand). According to his own gloss on the term, it refers to the wines raised in the lower-lying sandy subsoils as opposed to his hillside vineyards (when in fact, the grapes used to make this wine were once intended for his flagship red wine, the Dettori Rosso).

When opened a bottle the other night with a heaping helping of carnitas at our favorite taco stand in La Jolla, Bahia Don Bravo.

We didn’t get any of the volatile acidity that folks on the boards have talked about and the wine was fresh and bright, juicy and tasty. Had I not known it was a declassified Dettori, I would have said it was the rosso (it’s one of those wines that, if you follow the producer, you can easily pick out in a blind tasting).

I loved the wine and it was a fantastic pairing for the salty, fatty carnitas. 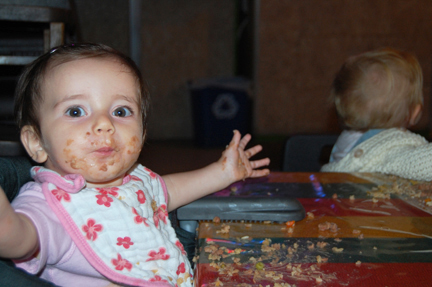 Georgia P had refried beans for the first time that night. I think it’s safe to say that she liked them. ;)

We were sad to say goodbye to grandma Judy, Georgia P’s cousins, and all our good friends in San Diego. But after a week on the road and away from our little house at the corner of Gro[o]ver and Alegria, it was time to get back to Texas where we belong…

Not bad for a therapy band! What a great way to celebrate the last night of Hanukkah. Thanks to everyone who came out, shared food, opened INSANE bottles, and jammed with us!